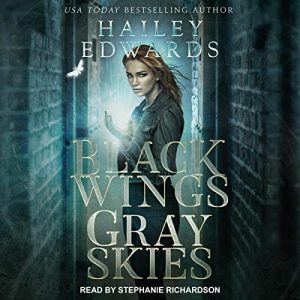 Picking up within a week or two of the conclusion of the previous story, Black Wings, Gray Skies starts with the gang investigating missing human children near Charleston, South Carolina. Due to the nature of the disappearances, Black Hat believes powerful magic is involved (and they are correct).

Like the previous stories in the series, Black Wings, Gray Skies focuses on Rue and her continuing journey to becoming a White Witch and suppressing her black urges. I liked that we learn a bit more about paranormal organizations outside of Black Hat, and how the Bureau works with small towns and existing police forces, and that the director has his hands in everything paranormal.

The mystery of what is happening in Charleston is dark, and the trio is introduced to a new paranormal creature. I have to say the creatures’ weakness is pretty odd, but the fact that Rue and Asa make fun of the “lame” weakness makes it better. It’s still silly, but at least the author/characters acknowledge it.

Overall, I enjoyed the story, but the pacing felt off. The first half was slow and focused more on personal matters than the case. The author spends a lot of time on Rue and Asa’s romance aka “fascination”. It’s become repetitive, and I’m losing interest. I’m all for romance in my UF and I like this pair, but it felt like the romance part took up too much page time. Additionally, the book felt a bit disjointed with a handful of stories in play. I liked each component of the book: the mystery, a strange black witch in town, and the romance, but they didn’t gel together. There is a big twist at the end that will have significant ramifications on Rue’s dealings with the director (aka Grandfather), and I look forward to finding out more.

Narration: The story is shared via first person POV of Rue. Ms. Richardson uses a strong, confident feminine voice for Rue/the narrator, which suits the character and storytelling. The narrator alters dialogue, giving characters a unique voice, suited to the age, gender, species, etc. Some voices are immediately identifiable, like that for Clay, whose voice is deeper, slower, and large, just like him. I also enjoy Colby, whose young voice sounds a bit cartoonish, which is perfect for the mythological friend. The narrator successfully portrays emotions and has created unique identities for the main characters.

In the end, I continue to enjoy the Black Hat Bureau series with its strong over-arching plotline and romance, and look forward to finding out what’s next for Rue and the gang.

My Ratings
Story: B-
Narration: B+

Monsters with a taste for children are nothing new, but fairy tales never mentioned this nightmarish predator. Rue has her hands full tracking the creature hunting the streets of Charleston, but a call from home divides her attention—and her loyalties.

A stranger has come to Hollis Apothecary, asking questions that prickle the hairs on her nape, but she can’t abandon the victims based only on a bad feeling. The pit in her stomach only grows when the stranger takes a hostage and makes his demands. He wants to talk to Rue, face to face. Or else. What he has to say will change her life, and her perception of her past, forever.