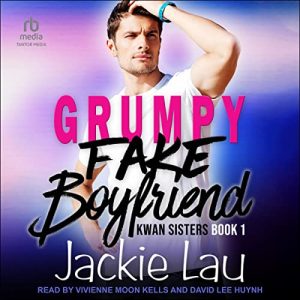 Will is an introvert science fiction writer who enjoys spending time alone, reading and writing. When his only in-person friend asks him to pretend to be his younger sister’s fake boyfriend for a long-weekend getaway, Will feels he can’t say no, even though he knows it will be a nightmare.

Naomi, seven years younger than Will, recently got out of a two-year relationship and can’t show up to the annual weekend getaway solo, especially when her ex will be there with his new girlfriend. She’s excited that her pre-teen crush Will has agreed to come along, but even though he’s hot, he’s annoying and no fun.

Grumpy Fake Boyfriend is a close-proximity, fake-relationship romance with hints of enemies-to-lovers. Naomi and Will can’t seem to find common ground for the first part of their trip and they bicker incessantly. Even as the couple spends time together, their foundation for a relationship is all lust and pent-up desire. Not that there is anything wrong with that, but I didn’t see the genuine love bonds developing as one would hope. However, by the time they realize there is something special between them, I was on board with the relationship. I liked watching both characters realize who they are meant to be, without obvious signs, and how spending time with the right person helps one see how relationships should be.

Narration: The story is shared via the alternating first person POV’s of Will and Naomi, with David Lee Huynh reading Will’s POVs and Vivienne Moon Yi performing Naomi’s POVs. Both narrators are good matches for their main characters. DLH uses a neutral male voice, free of any significant accent. VMY is bubbly, upbeat, and perky, fitting of the younger Naomi. Both successfully alter dialogue for gender and age. Both infuse their first person narrative with emotion, especially when the couple bickers or banters. They are so successful at this, that I found myself utterly annoyed by Will and Naomi for much of the first half of the book.

My biggest issue is the way the story is told in almost a confessional manner, as if the characters are talking directly to the reader rather than mulling things over in an internal monologue. Between the writing style and narration, I had trouble distinguishing when the character is speaking dialogue and when they’re not (when they’re talking to themselves/the reader).

Overall, I enjoyed Grumpy Fake Boyfriend and found the romance easy with an HEA. However, I was put off by the bickering and storytelling, and it was tough to distinguish dialogue and inner monologue. But in the end, the story is fun and great for a weekend read.

My Ratings
Story: B-
Narration: B-

I’m a pretty simple guy. When I’m not writing a science fiction novel, I’m watching a good movie or reading a book. Alone. I like my reclusive life. That is, until my only friend asks for a favor—pretend to be his baby sister’s boyfriend on a couples’ getaway. Her ex is going to be there and she needs me as a buffer.

I should have said no, but Naomi is bubbly, energetic, and beautiful. She also means everything to her brother. But now, our fake romance is starting to feel all too real, and I find myself stuck between the promise I made to my friend and risking my heart to the one woman who might actually get me…