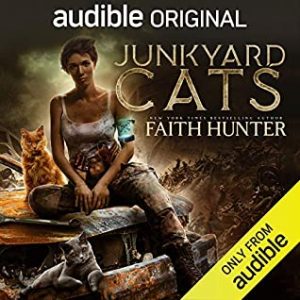 Shining Smith runs a junk yard where she hides because she is official dead. She’s not all human… she’s undergone genetic modification from alien bugs and no one must ever find out the truth. She harbors a LOT of illegal tech and weapons on site, not to mention her war-bot friend, Mateo. Things are going fine until Enforcer Jaeger shows up, followed by a cell of MS Angels. Suddenly the normally quiet junkyard is a battle zone.

Junkyard Cats is a solid futuristic sci-fi. There are gadgets and space junk; sentient cats and sarcastic artificial intelligence; evil gangs and hive-mind tech bugs. Although a novella-length tale, the story is complex and interesting. The author slowly shares the world via Shining’s POV as the book unfolds. It’s a great way to tell the story, but there is a steep learning curve as you listen and try to catch up on the futuristic human history.

The story focuses on a dangerous motorcycle club who comes on to Shining’s land for an unknown purpose (which we discover over the course of the book). As she and Mateo fight for their lives and to stop their plans, we learn more about the world, Shining and Mateo’s histories, and the reason the cats are so spectacular. There is also some flirting and potential future romance between Shining and Jaguar. And like so many complex sci-fis, there is a lot of gray in Shining’s story. The darker side of technology and survival is made apparent. I really, really hope Ms. Hunter continues the series because the story is far from over.

Narration: Junkyard Cats is shared via the first person POV of Shining. Ms. Hvam’s voice for the narrator/Shining is on the deeper side of average female and has a gravely component at times. She alters the voice for dialogue, using distinct accents and dialects for each character. I especially enjoyed the British accent of her late father, and the Russian(?), metallic accent of Mateo. I like how she portrays Shining. She’s got an edge and you can hear it in her voice… it’s not soft and comforting. It’s got grit. You can also hear exasperation with the situation in her non-spoken verbal cues. She brings Shining to life.

After the Final War, after the appearance of the Bug aliens and their enforced peace, Shining Smith is still alive, still doing business from the old scrapyard bequeathed to her by her father. But Shining is now something more than human. And the scrapyard is no longer just a scrapyard, but a place full of secrets that she has guarded for years.

This life she has built, while empty, is predictable and safe. Until the only friend left from her previous life shows up, dead, in the back of a scrapped Tesla warplane, a note to her clutched in his fingers – a note warning her of a coming attack.

Someone knows who she is. Someone knows what she is guarding. Will she be able to protect the scrapyard? Will she even survive? Or will she have to destroy everything she loves to keep her secrets out of the wrong hands?