Audiobook review: Killers of a Certain Age by Deanne Raybourn 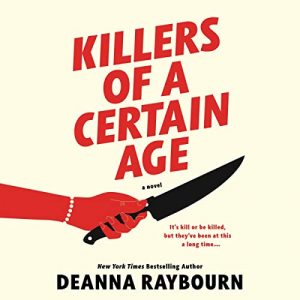 Billie, Natalie (Nat), Helen, and Mary Alice are assassins. Back in the late 1970s, each woman was recruited by the extra-governmental group known as the Museum to be part of their first all-female team. Nearly forty years later, they are ready to retire. Reuniting for the first time in several months, the women are enjoying an all-expenses-paid luxury cruise until Billie figures out that there is a Museum assassin on board. Whether they are the target of or collateral damage in a mission, the foursome realize they have to take matters into their own hands, trying figure out what is going on before they end up dead.

Killers of a Certain Age is a highly entertaining action adventure, featuring mature women who can take names and kick ass, although they’ll feel it in the morning. I loved that they aren’t superheroes, just well seasoned women who spent 40 years being very good at their jobs. They need two hours of yoga and ten-mile walks to stay fit. They experience hot flashes and worry about bone density. They have experienced both love and loss. The author writes about real emotions within a fantastical story, and it left me feeling good about growing older.

The story is told from two different POVs. The primary story of the four women retiring and puzzling out who is after them and why is shared via the first person POV of Billie. However, the story kicks off in the past when the women are on their first mission, and from time to time, the story goes into these “flashbacks.” These chapters are told in a quasi-third person POV of Billie, yet the POV can jump instantaneously to other characters, creating a somewhat omnipotent POV. This POV shifting and the fact that these flashbacks are shared in present tense, caused some confusion, and it took me a bit to feel comfortable with the changes. The flashbacks offer insight into the conditions under which the women joined the Museum and who they worked with in the past.

The “present day” story is both the action and heart of the tale. We experience life for these women as the grow older and how they created a life worth living. We experience their regret, loss, love, and adventure. At times, I was on the proverbial edge of my seat as the women literally ran for their lives. The author includes a number of details about the sites and sounds, how Billie is feeling, what she’s thinking; it created such a wonderful visual for me as if I was running along side Billie. And in addition to the action, there is a story of friendship and sisterhood. At the end of the story I actually cried as I experienced so many emotions through Billie and the women. I loved watching them finally find some peace in their lives.

Narration: There are two narrators for this story: Christina Delaine voices the flashbacks. She uses a no-nonsense voice for the narrator with little emotional inflection. She changes her voice for dialogue, giving each character a unique voice, adjusting for gender and age, and she has a large array of accents. Jane Oppenheimer voices the first person POV of Billie in the “present.” Her voice is softer around the edges, more friendly and inviting – fitting of the 60-year old. She fills her narration with emotion, and I loved how she would pick up her pace, creating urgency in high-stress situations. She also changes her narration for dialogue, successfully adjusting for gender, age, and accent. Both narrators add much to the story, and I really liked the two different styles for the two different POVs.

Killers of a Certain Age is the story of four special women and how life had worn them down and lifted them up. It’s full of action and adventure, friendship and love. It’s the wonderful story of how these friends became killers of a certain age.

Billie, Mary Alice, Helen, and Natalie have worked for the Museum, an elite network of assassins, for forty years. Now their talents are considered old-school and no one appreciates what they have to offer in an age that relies more on technology than people skills.

When the foursome is sent on an all-expenses paid vacation to mark their retirement, they are targeted by one of their own. Only the Board, the top-level members of the Museum, can order the termination of field agents, and the women realize they’ve been marked for death.

Now to get out alive they have to turn against their own organization, relying on experience and each other to get the job done, knowing that working together is the secret to their survival. They’re about to teach the Board what it really means to be a woman—and a killer—of a certain age.