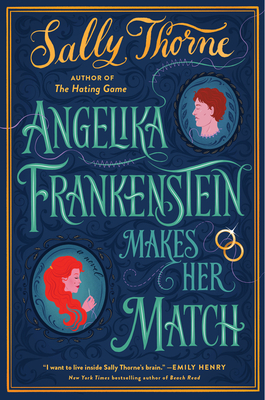 Sally Thorne has done a great job of retelling Marcy Shelley’s Frankenstein. It was funny, had romance, and had some similarities to Shelley’s story and the story of how Shelley wrote Frankenstein. I dare say Thorne’s depiction of Victor Frankenstein was a Grandiose mixture of Lord Bryon and Kenneth Branagh (the British actor who played Victor in Mary Shelley’s Frankenstein movie in 1994. (For those who may not know Lord Bryon as a ladies man and Branagh believed himself to be one as well much like his character in Harry Potter, Professor Lockhart.) Further more there are characters named Mary and Percy, Angelika’s horse and reference Milton’s Paradise Lost. I this all had me geeking out as a person with a BA in English. LOL!

Ok if I’ve not lost you yet, let me tell you about Thorne’s story. If you’ve watched or read Shelley’s story you know that Victor had an adopted sister Elizabeth and they later marry and the monster ends up killing Elizabeth. Well in Thorne’s story Angelika is Victor’s biological sister and Lizzie (Elizabeth) is not their adopted sister. Angelika and Victor are best friends and she assists him in his race against a German scientist to raise the perfect specimen.

Victor teases Angelika (aka Jelly, his pet name for her) about making her a husband since no one in town will marry her. They both reanimate corpses, Victor’s runs out into the rainy night and they mud wrestle each other as Angelika talks to hers. Imaging Victor and his monster grappling outside had me in stitches.

Throughout the story there are glimpses of Victor’s creation as we follow Angelika’s POV of her getting to know Will, her creation. The mystery of his past life and the question, how can they have a HEA if he is a dying corpse.  But have no fear dear readers there is a HEA and getting to it is so fun and unexpectedly sweet and sexy that even if you are not a lit major like me you will still enjoy it. Sally Thorne has breathed new life into the house of Frankenstein with Angelika Frankenstein Makes Her Match.

For generations, every Frankenstein has found their true love and equal, unlocking lifetimes of blissful wedded adventure. Clever, pretty (and odd) Angelika Frankenstein has run out of suitors and fears she may become the exception to this family rule. When assisting in her brother Victor’s ground-breaking experiment to bring a reassembled man back to life, she realizes that having an agreeable gentleman convalescing in the guest suite might be a chance to let a man get to know the real her. For the first time, Angelika embarks upon a project that is all her own.

When her handsome scientific miracle sits up on the lab table, her hopes for an instant romantic connection are thrown into disarray. Her resurrected beau (named Will for the moment) has total amnesia and is solely focused on uncovering his true identity. Trying to ignore their heart-pounding chemistry, Angelika reluctantly joins the investigation into his past, hoping it will bring them closer. But when a second suitor emerges to aid their quest, Angelika wonders if she was too hasty inventing a solution. Perhaps fate is not something that can be influenced in a laboratory? Or is Will (or whatever his name is!) her dream man, tailored for her in every way? And can he survive what was done to him in the name of science, and love?

Filled with carriages, candlesticks, and corpses, Angelika Frankenstein Makes Her Match is the spooky-season reimagining of the well-known classic that reminds us to never judge a man by his cadaver!