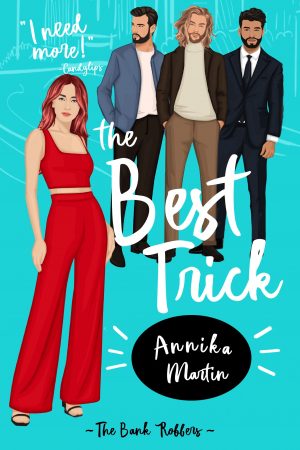 Picking up some time after the conclusion of the previous book, The Best Trick opens with the God Pack living it up in a secluded Airbnb and loving it. They want to stay but Zeus is insistent they leave since it’s been ten days and they have a rule. Once on the road, the gang gets up to their usual antics until their enemy, Agent Denko of ZOX tracks them down. In exchange for evidence that can clear their names, the gang must track down Denko’s kidnapped dog, Doris.

The Best Trick is the perfect ending to one of the sexiest, silliest, most entertaining series I’ve read. The books follow four, married-as-a-group, bank robbers who crave excitement and kinky times. Although each story is a standalone mystery, the entire series should be read in order since each book builds upon the previous in both character development and over-arching storyline.

It’s been over five years since the release of the previous book, and I’ve really missed these guys. I’ve grown attached to the foursome as they’ve grown close and developed a loving relationship over the years. The Best Trick is emotionally satisfying as the characters address some of their darker emotions and deep-routed issues. At times, I was on the edge of my seat as I worried for the very souls of the characters, but the group shines in their ability to love one another no matter what. The back and forth between the group provides both heart-wrenching and yet comforting moments as they give of themselves out of love.

Although the story starts of slowly, once the group begins their search for Doris, the pace picks up dramatically. The gang must explore every avenue, often tracking down dead-end leads. I loved watching the gang piece together the clues to figure out who took Doris. Although two of the God Pack are former spies and have excellent investigative skills, each member of the foursome have strengths that help solve the mystery. I love how the guys look to Isis as she reads people and notices things the others do not.

And rounding out the emotions and action is Ms. Martin’s quirky humor which infuses both the good and dark times. The gang uses humor to lighten the mood, to make up after an intense discussion, and to tease one another, leading to sexy times. One of my favorite moments in The Best Trick is the whole discussion centering on whether or not a surprise is still a surprise if you know a surprise is coming.

In the end, I love Kinky Bank Robbers series hard. I take great delight in how much the characters have grown over the course of each book. I love that they care about each other so much, and how they express it. Most of all, I love that the author will allow these guys to be dark, yet their mutual love protects them from going too far. The Best Trick caps off the series with an outlandish, yet emotionally deep and intelligent plot that fans of the series will love.

My guys and I are stunned when our worst enemy, Agent Denko, comes to us for help.

Agent Denko, the man whose fondest wish is to destroy us in the most disturbing way possible, needs our help.

Are pigs flying? Has hell frozen over? Has Odin’s way of removing his glasses stopped being sexy?

At first, we’re sure it’s a trick. My guys’ protective instincts are on full alert as they turn their sights on the man who’s had us in his sights for too long.

It’s foolish to trust Agent Denko…right? But what if he really needs our help?

How can we push him away when he holds the key everything we’ve always wanted?