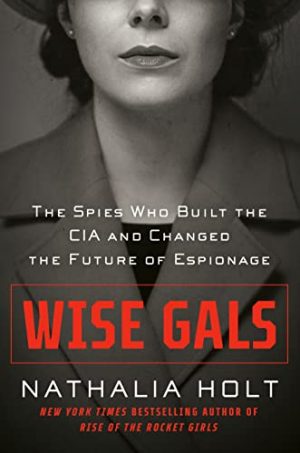 Wise Gals is a very well written, extremely well researched book that covers incredible information about the women who were pivotal to the creation and success of CIA. These are stories that have never been told because they couldn’t be, and the stories need to be told, but the book is written like a research paper.

The stories are there, and within the stories we get shadows of who these amazing women were, but because all the women are deceased everything is second hand or third hand or has been pulled from various documentation leaving the book feeling cold. I want to know these women, their thoughts, emotions, etc., instead I feel like I get a beautiful sketch of them but only their outline or a view of their backs or worse yet, a stunning sketch of their faces but with cold eyes: a likeness that lacks depth and feeling. I wanted feeling.

Am I smarter and better informed for having read Wise Gals? One-hundred percent yet! But it really wasn’t my taste in books; I think I would have preferred a memoir or even a novel based on any one or all of these women, more than I enjoyed Wise Gals. That’s not to say it isn’t a good book, it is; it gave me insight into the COA and World War II I’d never had before, and if you enjoy well-researched, well-written historical nonfiction, I think you’ll enjoy this book. It just wasn’t the right book for me.

In the wake of World War II, four agents were critical in helping build a new organization that we now know as the CIA. Adelaide Hawkins, Mary Hutchison, Eloise Page, and Elizabeth Sudmeier, called the “wise gals” by their male colleagues because of their sharp sense of humor and even quicker intelligence, were not the stereotypical femme fatale of spy novels. They were smart, courageous, and groundbreaking agents at the top of their class, instrumental in both developing innovative tools for intelligence gathering—and insisting (in their own unique ways) that they receive the credit and pay their expertise deserved.

Throughout the Cold War era, each woman had a vital role to play on the international stage. Adelaide rose through the ranks, developing new cryptosystems that advanced how spies communicate with each other.  Mary worked overseas in Europe and Asia, building partnerships and allegiances that would last decades. Elizabeth would risk her life in the Middle East in order to gain intelligence on deadly Soviet weaponry. Eloise would wield influence on scientific and technical operations worldwide, ultimately exposing global terrorism threats. Through their friendship and shared sense of purpose, they rose to positions of power and were able to make real change in a traditionally “male, pale, and Yale” organization—but not without some tragic losses and real heartache along the way.

Meticulously researched and beautifully told, Holt uses firsthand interviews with past and present officials and declassified government documents to uncover the stories of these four inspirational women. Wise Gals sheds a light on the untold history of the women whose daring foreign intrigues, domestic persistence, and fighting spirit have been and continue to be instrumental to our country’s security.