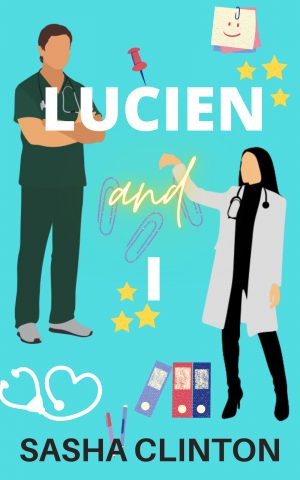 Memo: Do NOT kill Lucien Stone in a fit of rage.

On Monday, I jerk awake at 4 am. It’s my weekday ritual—to wake up suddenly at unsociable hours and reach for my pager to check if an emergency has erupted overnight.

I’m expecting a transfer patient with a gunshot wound or an emergency cardiac tamponade case that must be managed immediately, or even the floor nurse’s passive-aggressive rant on how the male patient who got a bypass three days ago has been giving her ‘the look’ and that she thought it appropriate to give him sedatives.

When you’re a thirty-four-year-old with no social life, no hobbies, and barely any time to sleep, you take whatever form of entertainment you can get.

There’s nothing, though. No news. No villainous pager ringing on my nightstand. I’m not on call today, meaning I’m not even in possession of the pager. Meaning I just woke up because of a subconscious fear/nightmare of having someone die because I was sleeping.

Once my eyes are open, I can’t go back to sleep. I wash my face and wander around the teeny-tiny studio apartment I rent. But wandering about like a ghost only occupies my frazzled mind for a few minutes. By 4:50 a.m., I’m clad in workout clothes and heading out for a run on the frozen, snow-covered streets.

In the building lobby, I stretch my hands over my head and warm up. Then I stick in my AirPods , turn on my playlist of loud, Top 100 hits, and step outside. The chilly air stings my eyes which are already red from lack of sleep. I turned in at 10:30 pm yesterday, early by anyone’s standards, but I couldn’t sleep much.

The streets are mostly empty, but let’s be real, this is Manhattan. It’s never really deserted. The shops that line both sides of the road are closed, but there’s light and movement in some of them. Probably just the owners getting in early to set things up for the day.

Snow is scattered on the side of the sidewalk like white dust. A headband keeps my ears warm, but my nose burns with the bite of the freezing morning air.

And speaking of the devil…

His silhouette unfurls from the entrance at what has to be the most perfectly coincidental time ever. I swear I must be imagining it because it feels like he’s staring right at me, even though he’s not even looking in my direction.

I clutch my iPod tightly. No matter how much I want to rip my gaze away, it sticks to him like iron filings to a magnet.

He’s clad in his regular exercise gear—black running shorts and running jacket, warm black tights underneath, to protect his legs from the cold. In the all-black attire, he should look ready to attend a funeral, but instead he looks ready to model on the runway of the New York fashion week. If I was making a picture dictionary, I’d put his image right next to the words ‘hot’, ‘immaculate’, and ‘sexy’.

Thick, black hair brushes over his eyebrows with his face angled down as he bends down to lace up his shoes. His high, sculpted cheekbones, perfectly straight nose, and full, luscious lips make him look too ethereal to belong against the backdrop of an average street in New York. I sometimes wonder why he didn’t get into acting since his aunt, Maxima Anderson, is an A-list actress. He has the connections and the looks. Plus, the colossal ego and self-confidence required to excel in Hollywood.

A single loud bass note from my iPod startles me and shocks Lucien’s attention to me. I pressed it by mistake. Sh*t.

He detaches himself from the building and begins to saunter toward me.

“Good morning, Mira!” He waves across the distance to me, all eager to ruin my morning.

“Too late, Luci” I say, using the nickname only I ever call him by. Luci. Short for both Lucien and Lucifer. A fitting name for a guy who is basically an asshole with an angelic face.  “My morning was good before I ran into you.”

“It was good before, but it’s awesome now, right?” He runs his long fingers through the dark, wet strands of his hair. “Can’t help it. I brighten up everybody’s life.”

I shake my head. “I wonder how you manage to contain that massive ego in your tiny body. It just doesn’t seem scientifically possible.”

“Ego is a philosophical construct. It doesn’t require physical space.”

“Yours definitely does.” I rub my eyes. They’re watering because of how little I’ve slept and how long I spent staring at the computer screen yesterday.

I could stand here and banter with Lucien all day, because that’s our default, but I need to get in shape, so I begin to run. Luci falls into step beside me effortlessly. I’m not surprised that he’s faster than me or that he doesn’t even stop to catch his breath every two minutes. Being annoying, perfect, and annoyingly perfect all at the same time is Lucien’s most prominent personality trait, after all.

Mira Krishnan is a cardiothoracic surgery fellow whose three big goals in life are:
1. Achieve superstardom in the field of heart surgery
2. Crush Lucien Stone by showing him that she’s the superior heart surgeon.
3. Fall in love with someone who is NOT Lucien Stone so she can erase her years-long crush on him.

Lucien and Mira have been rivals since high school, and she’d like nothing more than to wipe that smug, overconfident smirk off his devastatingly handsome face.

But when their rivalry goes too far and they’re caught in the middle of a fight by the program director, Mira’s life changes. To avoid being expelled from the fellowship for failing to conduct themselves in an appropriate, collegiate manner, Lucien and Mira are forced to lie about dating each other so they can dismiss their behavior as extreme flirting. But going on fake dates, vacations, and spending time together makes them realize that underneath all the jibes and rivalry, there’s potential for something more…and perhaps, instead of looking into other people’s hearts, they need to look into their own.