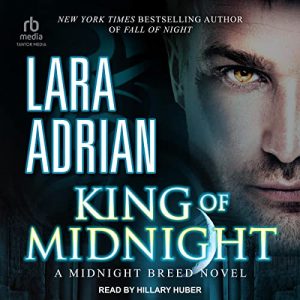 I’ve read the Midnight Breed series for over a decade now; it was one of the first romance series I started back in the day. It once was one of my favorites; however, after the author forwarded the series ahead in time twenty years, I never felt the connection to the characters and stories like I did in the beginning. That said, I kept with the series which concludes with King of Midnight.

The story opens shortly after the end of the previous, with the Order facing attacks from Opus Nostrum, who is turning Breeds into Rogues with Red Dragon. They are also worried about an Ancient who has two Atlantean crystals. Finally, they are trying to form an alliance with the Atlantean colony to help fight the Ancient and the Atlantean Queen Selene. Breeds and humans are being attacked on multiple fronts, and the Order cannot keep up. So why is it that the Order founder’s son, Darion, cannot stop thinking about Queen Selene despite their adversarial relationship?

I’ll start with the good. The story is a solid, satisfying ending to the series. The Order finds a way to defeat its enemies and survive the onslaught without losing sight of its core values. All of the original Order members, Breedmates, and their children make an appearance, and each seems to have found an HEA. The overall plot is exciting and entertaining. I enjoyed how the author ties up the battles and brings peace to the Order.

With that said, I continued to struggle with the writing of the books. First, there is so much repetition that the audiobook could have been about an hour shorter had it been edited to remove the constant reminders of who the Order is fighting, what Red Dragon is, and even what happened in previous chapters. Second, the romance between Darion and Selene did not work for me. They don’t even meet until 40% into the book, with the first part of the story reading more like a multi-POV urban fantasy. There are only a handful of POVs shared by the two main characters until they finally meet. I also had trouble with the fact that they have been enemies for years and just one look causes Darion to fall in love. Finally, there is a bit of an ick factor for me. She’s a thousands-year old queen with a granddaughter the same age as Darion. The narrator reenforces this age gap because her voice for Darion is too youthful sounding to be a seasoned warrior.

Narration: The story is shared in shifting third-person POVs of multiple characters. Ms. Huber uses a narrator voice that is very matter-of-fact and straightforward for all POVs. The neutral narrator comes off a bit robotic at times in contrast with the dialogue, which is emotion-filled. Every character has a nearly unique voice, usually distinguishable from the others. She adjusts her voice for gender and supplies a variety of accents. Her performance for Darion is suitable for the young warrior; however it reinforces the too-young-for-the-Atlantean-Queen image I had of him.

In the end, I’m glad I was able to listen to King of Midnight and discover how the series finishes. The author brings the series to a satisfying conclusion, one which fans of the series should enjoy.

My Ratings
Story: C+
Narration: B-

As a Breed warrior and the son of the Order’s founder and commander, Darion Thorne is an exacting tactician and a lethal combatant, yet nothing can prepare him for the catastrophic act that forces him to step to the helm of the Order as its leader. With their adversaries growing bolder and more brazen with every strike, Darion knows he must take the war to them before it’s too late to stop them at all.

Yet of all their enemies, the one most dangerous for Darion is the beautiful, yet volatile, Selene, Queen of the Atlanteans. Determined to recover four powerful crystals stolen from her ages ago, Selene will go to any lengths to have them. When that goal puts one of the Order’s own in the crosshairs, she finds herself locked in a personal battle with Darion, a Breed warrior she knows she should despise, yet who stirs an unbidden desire within her.

With the battle lines drawn between them and a diabolical evil on the rise, can Darion and Selene put aside their mistrust in time to save all they hold dear, or will they see the world plunge into a darkness that has no end?