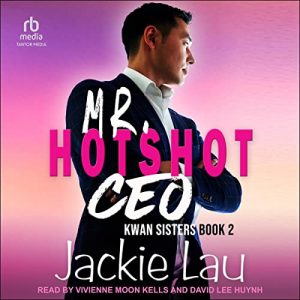 When Julian’s father retired after having a heart attack a couple years ago, he left Julian (the eldest of three brothers) in charge of the family business. Afraid that Julian is going to end up with the same fate, his mom and grandmother confront him at work and force him to take a two week vacation. Unsure of how to relax and have fun, Julian approaches a beautiful stranger he’s seen before at his favorite coffee shop.

Courtney, older sister of Naomi from the previous book, struggles with severe depression every five years. Because of her mental health history, Courtney has learned to find joy in the little things, including the gingerbread latte at the local coffee shop. When (THE) Julian Fong approaches her, asking for her help and offering her an impressive sum of money, Courtney can’t turn down his interesting request.

Mr. Hotshot CEO is the second standalone romance in Ms. Lau’s Kwan Sisters series. The story has a Pretty Woman vibe with an overworked CEO and a fun-loving, spirited love interest. The author does an amazing job portraying a woman with depression, getting listeners inside Courtney’s concerns and fears and portraying her emotional state with sensitivity and clarity. I appreciate that the author doesn’t make light of Courney’s illness and that meeting the right man doesn’t fix her. Because of her mental health, and the fact that her previous boyfriend left her when she was ill, Courtney will not risk falling in love again. Yet, she finds Mr. Right in Julian, although it takes time for her to recognize his sincerity and trust in his love.

Julian is an amazing partner. He is truthful and caring. He realizes he has something special with Courtney and rather than falling back on his “I don’t do relationships” stance, he opens up to her and confides he wants more. I love that he continues to listen, grow, and move forward despite the road blocks.

I did struggle with the premise of this one a little bit – how Julian’s family just forces him into a vacation and takes away his phone. His family is uber-aggressive and his younger brother Vince is an ass. I was pissed on behalf of Julian. But as the book progresses, we learn that his family’s concerns aren’t unfounded, and I like that Julian steps outside his comfort zone to do what’s best for himself.

Narration: The story is shared via the alternating first person POV’s of Julian and Courtney, with David Lee Huynh reading Julian’s POVs and Vivienne Moon Yi performing Courtney’s POVs. Both narrators are good matches for their main characters. DLH uses a neutral male voice, free of any significant accent. VMY is bubbly and upbeat when Courtney is healthy, but shifts to a lower, worried voice for times when she is ill. Both successfully alter dialogue for gender and age. Both infuse their first person narrative with emotion. Once in a while, I struggled to distinguish when a character was speaking to themselves or out loud, but that’s more a function of the writing than the narration.

Overall, I enjoyed Mr. Hotshot CEO. I liked listening to the couple’s journey, both the struggles and the joys. The romance is sweet. Courtney’s appreciation of the little things made me happy.

I’m a pretty simple guy. When I’m not writing a science fiction novel, I’m watching a good movie or reading a book. Alone. I like my reclusive life. That is, until my only friend asks for a favor—pretend to be his baby sister’s boyfriend on a couples’ getaway. Her ex is going to be there and she needs me as a buffer.

I should have said no, but Naomi is bubbly, energetic, and beautiful. She also means everything to her brother. But now, our fake romance is starting to feel all too real, and I find myself stuck between the promise I made to my friend and risking my heart to the one woman who might actually get me…