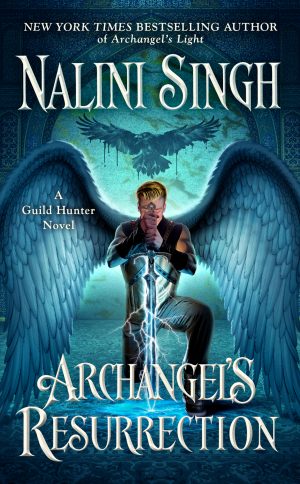 Alexander and Zanaya have loved one another for eons, their attraction beginning from the moment they first met. Both are powerful archangels, loving for centuries and fighting for decades at a time until Zanaya Sleeps, leaving Alexander alone for millennia. When the Archangel of Death, Lijuan, began her attack on the world during the most recent Cascade, both Alexander and Zanaya were awake and fighting to protect the mortals. Then Lijuan drained Zanaya’s life-force, leaving her nearly dead. Alexander is unsure if his one and only love will ever be whole again.

Archangel’s Resurrection is a story that literally spans eons, beginning countless generations before the Guild Hunter series begins. It is impossible to capture just how expansive and long the pair have been alive and in love. The book opens with the events that occurred during Archangel’s War (book 12), and then goes back in time for the first third of the story. While it was interesting to discover more about the pair and see the roots of their romance, because the time is so expansive, the narrative jumps hundreds of years at a time. It reads like a montage in a movie… bits and pieces of their life and love story, but nothing whole or solid.

The next quarter of the book occurs in parallel approximately with the previous three books. But even then, there is a lengthy flashback. Again, I found it interesting – it’s Nassir’s origin story – but it didn’t add much value to the romance or progression of the story. Its purpose, like much of the time spent in the past, is to establish why the main characters are who they are. But it’s telling rather than showing, and I got bored with so much time spent in the past.

Finally, at about the 60% mark of the story, time jumps ahead ten years to the future when Zanaya finally awakes and the true heart of the story begins. However by then, I honestly didn’t care about the couple. The story is extremely slow moving, with relatively little meaningful action. Additionally, I’m tired of Lijuan. She died three books ago, yet continues to be the source of trouble for the world.

Despite being indifferent to the main couple’s romance, I did enjoy Zanaya. I loved that she stood up for what she wanted, always knowing what it would take to make her ambitions a reality and going for it. And in the later part of the book, she learns to adjust to a new power that could be consider evil, yet she finds a positive way to use it.

In the end, Archangel’s Resurrection is a decent story, but I would have been fine without it. Unfortunately, I never really cared about Alexander and Zanaya as a couple. In addition, the story spends too much time in the past, without spending much effort to forward the series.

For thousands of years, the passion between Alexander, Archangel of Persia, and Zanaya, Queen of the Nile, burned furious and bright, seemingly without end. But to be an archangel is to be bound to power violent and demanding. Driven by its primal energy, Alexander and Zanaya fought as fiercely as they loved. Locked in an endless cycle of devotion and heartbreak, it is only Zanaya’s decision to Sleep that ends their love story.

Eons later, it is the Cascade of Death that wakens them both. The passion between them a flame that yet burns, Alexander and Zanaya stand together in one last battle against the ultimate darkness. But even a warrior archangel cannot win every war. Alexander’s scream shatters the world as Zanaya falls, broken and silent…only to rise again in a miracle that may be a devastating curse. For is it truly the Queen of the Nile who has been resurrected?

Only one thing is clear: this is the last beat of their passionate, angry dance. The final song for Alexander and his Zani…