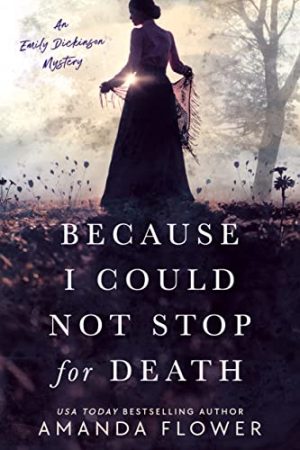 Because I Could Not Stop for Death
Author: Amanda Flower
Reviewer: Ang
Rating: A-

Because I Could Not Stop for Death is an interesting take on the author and poet Emily Dickinson and what could have been. In Amanda Flower’s novel, Emily and her maid Willa investigate the suspicious death of Willa’s brother Henry. Emily uses her family’s status in the small town of Amherst to open doors, asking and getting questions answered that Willa, as a lower class servant, would never be able to open or ask. The novel deals with topics like class, status, race, and women’s roles in history with heart but isn’t afraid to tackle them head on. For example, despite being a woman, Emily is able to ask questions of people that Willa as a female servant can’t nor can Jeremiah, Henry’s best friend, as a black man and servant.

Because I Could Not Stop for Death also tackles the topic of slavery, states rights, the approaching Civil War, invisible people, and the Underground Railroad. For a fairly short novel, it doesn’t shy away from difficult topics or controversial dialogue all while keeping the novel moving forward at a steady clip. Anyone of these topics could have easily weighed the book down or slowed the pace considerably, but Ms. Flowers keeps a steady hand on her characters and the topics throughout the entire novel.

My only issue with the book was the secondary story of Willa and Matthew. Their relationship, or lack of, is danced around throughout the entirety of the book, which I understand was on purpose as this is not a love story, but I would have appreciated some flashbacks to events with Willa, Henry, and Matthew that offered clarity to their relationship, or at least history, and there is nothing of that to speak of, leaving me wondering how Matthew can feel so strongly about Willa and Willa be so ambivalent about him, or maybe it’s marriage as a whole, it isn’t made completely clear.

Overall, Ms Flowers did a lovely job in what I’m hoping is the first of several Dickinson mysteries. It is clear she has done a plethora of research and tackles the enigma that is Emily and her family with candor and heart, making them complicated and engaging. I want to know more about them, and I was completely invested in Emily and Willa as characters and I think other readers will be too. If you are looking for a fun, mystery perfect for fall then pick up Because I Could Not Stop for Death by Amanda Flowers.

January 1855 Willa Noble knew it was bad luck when it was pouring rain on the day of her ever-important job interview at the Dickinson home in Amherst, Massachusetts. When she arrived late, disheveled with her skirts sodden and filthy, she’d lost all hope of being hired for the position. As the housekeeper politely told her they’d be in touch, Willa started toward the door of the stately home only to be called back by the soft but strong voice of Emily Dickinson. What begins as tenuous employment turns to friendship as the reclusive poet takes Willa under her wing.

Tragedy soon strikes and Willa’s beloved brother, Henry, is killed in a tragic accident at the town stables. With no other family and nowhere else to turn, Willa tells Emily about her brother’s death and why she believes it was no accident. Willa is convinced it was murder. Henry had been very secretive of late, only hinting to Willa that he’d found a way to earn money to take care of them both. Viewing it first as a puzzle to piece together, Emily offers to help, only to realize that she and Willa are caught in a deadly game of cat and mouse that reveals corruption in Amherst that is generations deep. Some very high-powered people will stop at nothing to keep their profitable secrets even if that means forever silencing Willa and her new mistress….