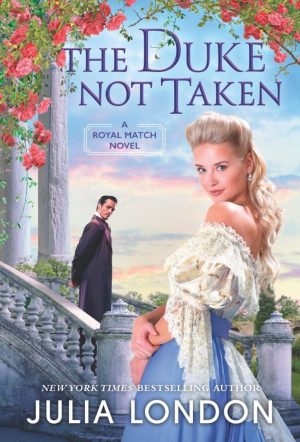 Amelia Ivanosen, Princess of Wesloria, is outspoke and many think she’s brash, but it’s just her nature to speak her mind. She’s not easily offended and doesn’t understand why others are. And she’s tired of trying to “fix” herself to fit in better. Joshua Parker, Duke of Marley, is distant and cold, preferring to be alone. He blames himself for his late wife’s death and knows he’ll never marry again.

On paper these two seem like complete opposites. She’s vivacious; he’s an introvert. Yet they are both very lonely people. Set in a time before people were aware of mental and emotional well-being, the book speaks of a man suffering from depression and anxiety. His wounds are deep and he sees no way out. It takes someone like Amelia, who understands his pain and is willing to love him regardless, to open him up to life. Similarly, she is lonely, despite being surround by friends and family. She just wants someone to love her for the woman she is rather than her title, wealth, or for a woman she ought to be.

The romance is very slow burn, which suits the couple. They need time to heal while getting to know one another and seeing past the exterior. I love how they inadvertently come to learn so much about themselves and each other through silly letters mistakenly attributed to other individuals. The times they do spend talking are real and heartfelt. His pain is palpable.

With that said, I was disappointed in the penultimate scene when Joshua is confused over his feelings and unsure of what actions to take to correct an egregious mistake. The entire scene was unnecessary, and I feel the story would have been better had the short incident been skipped altogether. I actually lowered my grade because of it.

In the end, I still rather enjoyed The Duke Not Taken, and seeing several of the characters from the prior books and series.

Ever since her sister became queen two years ago, Amelia Ivanosen, Princess of Wesloria, has been flirting and skirting scandal—just barely. Before she does anything too outlandish, she is sent to England and Lila Alexander, illustrious matchmaker to the ton, is recruited. Respectably ensconced at the country estate of a family friend, Amelia is introduced to many eligible bachelors, but…there is no spark. There never seems to be unless the man is completely wrong for her.

Next door lives Joshua Parker, Duke of Marley, who is grumpy and reclusive—for good reason. His first wife died in childbirth. When Marley is dragged by a friend to his neighbor’s soiree, he and Amelia instantly dislike each other. Their banter is snarky and heated. He’s a stuck-up smarty-pants; she’s a self-involved, annoying princess.

Sparks fly when they’re together—fireworks actually—but they loathe each other. Really. So why can’t they stop thinking about each other?

Reviews in the Series:
Last Duke Standing by Julia London (A Royal Match #1)