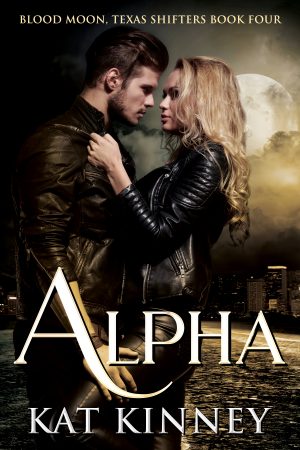 IT WAS A BRILLIANT JANUARY DAY, a crisp morning that had dawned clear and cold across Blood Moon, Texas. A sharp northeasterly wind stirred dry, brittle leaves across fallow cornfields and miles of ranchland.

The light swaying across the highway flipped from red to green. Pulling my Ford F-150 through the intersection, I headed west out onto the open road.

“Before we wrap up this podcast segment, I want to remind listeners to tune in next week where we’ll be covering the paranormal summit that was just announced hours ago by the President of the United States.”

Secured in his crate in the backseat, my two-year-old golden retriever, Major, whined.

“In the last six months, attacks against humans have increased in the major urban areas. In light of all the violence, some are questioning whether peace with vampires and werewolves is even possible.”

A wolf howled as the podcast theme music started up.

“You’ve been listening to Kristin Chen’s paranormal podcast. Be sure to send in your questions and comments and tune in next week.”

“What a cluster,” my brother Dallas muttered into his caramel latte, switching off the podcast and scrubbing at a stain on his gray hoodie that smelled suspiciously like baby formula. “I can’t believe we didn’t get any heads up that this summit was going to be a thing.”

Dallas was the foodie in the family, owned The Rusty Spoke, which was the best damn barbecue restaurant south of the Red River, and made sure when someone was hungry, there were enough slow-smoked beef ribs and potato salad on hand to feed an army. If my being a cop meant I tended to be slow to trust and quick to case every room I entered like it was a crime scene (in the words of the last two girls who’d deleted me and my golden retriever from their lives), Dallas’s love for food and life meant he always saw the best in people. Every time we walked into a restaurant, five people stopped by the table to shake my brother’s hand. His wife, Lacey, managed Blair’s Bakery, a gourmet cupcake shop in town, and they had a beautiful baby girl named Luna who was four months old.

In short, Dallas had his life together. While at twenty-nine, I couldn’t seem to get mine off the ground.

“Still think you should call Guillermo.”

Dallas sighed. “I’m just saying, in my experience there’s pretty much nothing that can’t be sorted out over a platter of ribs.”

Hearing his favorite word, Major scuttled towards the front of his crate, tail flagging hopefully.

“Not happening,” I warned my dog, shooting Dallas the evil eye. Hadn’t I just emailed my entire family the updated list of words they needed to spell out in front of Major in order to help him maintain his strict diet regimen?

Dallas pinched the bridge of his nose. “Look. I know Guillermo can be a hard ass. But it’s been four months. Someone needs to break the stalemate the two of you have going on.”

Our uncle, Guillermo Montemayor, was one of the most powerful werewolves alive, a projectionist capable of controlling dozens of minds at once. He was also head of the Southern Territorial Council, responsible for governing werewolf packs across the entire southern United States. It didn’t take a genius to figure out he would be heading up the werewolf delegation at the paranormal summit. Four months ago, I had defied his direct orders. Now he was calling for my removal as Alpha of the Blood Moon pack.

“Call from River Caldwell,” the female voice announced over the hands-free device.

“Uh oh. This can’t be good.” Dallas downed the rest of his latte and stowed the cup next to the stash of protein bars and all-natural dog biscuits that were cluttering up my center console.

Not good was the understatement of the century. Our youngest brother rarely called. The fact that said phone call was happening before dawn? Pretty sure the last time that happened, it was because River had bombed a rogue vampire coven back to ashes, had managed to take out his SUV in the process (amateur) and needed a ride home.

Just then, a blast of frigid wind slammed into the side of my truck. Cursing, I eased back on the accelerator. I’d just made six years on the force. It would be just fracking perfect if the guys down at fire and rescue had to come haul me and my truck out of the ditch. Oh, they’d double time it down here the moment the call came in from dispatch, no question. And then I’d be the butt of jokes at our weekly pickup basketball games for the next month. Make that the next year.

Brody Caldwell, deputy sheriff and alpha of the Blood Moon, Texas pack, receives a phone call on the eve of a crucial summit between humans, shapeshifters and vampires. An assassination attempt has been made against the leader of the werewolf council. One of his brothers claims responsibility. After a series of attacks and increasing hostility from the council, Brody seeks out a former source to get answers—London Blake, the fierce and beautiful former alpha of the Austin, Texas pack.

Two years ago, London was exiled by the werewolf council for a crime she didn’t commit. With her pack subject to human rights violations and the council refusing to listen, London turns to Brody to help her gather the intelligence needed to clear her name.

Someone wants them silenced. Together they will have to race against the clock to discover who is behind the attacks before they derail the paranormal peace summit.