PART I: ALL HELL BREAKS LOOSE

‘Now this is not the end. It is not even the beginning of the end. But it is, perhaps, the end of the beginning’. Winston Churchill

At this point, Cordelia was certain that nobody was following her. And now, with the spires of Castel Sant’Angelo in sight, the Vatican was just a few minutes away. I am almost there, she thought, reassured, but still slightly lengthening her stride. Cordelia was heading to a secret appointment in the Holy City with Father Colombo, an old friend of the family, who had promised to help her escape from Rome under a false identity. Although desperate to get there, she resisted the temptation of taking her car. It might have been quicker, but as not many women drove an automobile in Rome, she was afraid to run into a military patrol, be stopped and perhaps even taken to the Fascist command for questions. The last thing she needed was for them to start enquiring about her whereabouts and log her name to an official document at the station.

That morning, Cordelia had woken up quite early, quickly put on her robe and had left her home in the dépendance of the hotel, Palazzo Roveri. Cosier and more private, it was originally the former dwelling of the chief mistress of Cardinal Roveri, who could visit his mistress in total secrecy through a passage that connected it with the main building.

Looking at the palace’s glorious stone façade, she marvelled again at how successful it had become in a matter of a few years.

I have to leave all this, possibly forever, Cordelia thought with regret. 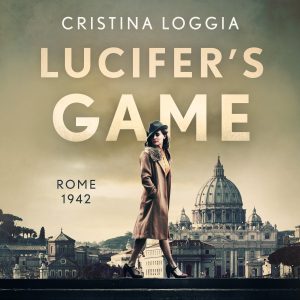 She crossed the scented, manicured garden and went straight into the kitchen through the back door. Alma, the cook, a dark-haired stocky lady in her late fifties, had already arrived, and the kettle on the stove was spreading a fragrant smell of freshly brewed black coffee. Flaminia, the waitress and hotel maid, was late as usual, but today Cordelia didn’t mind; in fact, it was better that way.

‘I have to go out this morning and might not be back for a couple of hours, Alma,’ she said.

Although the tone of her voice was calm, Alma knew her too well and could read a trace of tension on Cordelia’s face, but being a person of few words, she said nothing, and poured her an abundant cup of the aromatic liquid. Thanking Alma, Cordelia sat down and sipped it slowly, while enjoying the cool breeze coming in from an open window. It had been quite hot over the past week, and despite the storm of the night before, the weather was already warming up again.

Romans were already out in good numbers in the streets. It looked all so normal, with people going about their business, despite the war. But it wasn’t normal, not at all. Everyone needed to have ration cards to go shopping now, a system put in place by the regime, right after Mussolini made the ill-fated decision to enter the war in 1940. Finding certain types of food and other goods was becoming more difficult and, therefore, wives were rushing out of the door as early as possible to make sure they got at least the basics for the day. Cordelia could easily melt into the crowd.

She finished her coffee, got up and returned to her dwelling to get dressed.

Choosing to appear as ordinary as possible, Cordelia picked a light blue cotton skirt and a white blouse.

She looked at her image in the mirror: a bit taller than the average, with an hourglass figure and long voluptuous legs, she didn’t want to attract the usual attention from men. She was twenty-three years old now, but since she had reached her late teens, she had noticed heads turned when she went by. She hid her long, golden-brown hair under a silk headscarf, crossed it under her chin and tied it behind her neck. She grabbed her bag and slipped out of the side door of the walled garden.

Instead of taking a more direct route, which would have brought her to Father Colombo’s house inside the Vatican in less than thirty minutes, Cordelia decided to go a different way. It would take longer to get there, but if somebody was following her, she would have the chance to spot her pursuer. She had had the sensation she was being watched of late, although Cordelia never really saw anyone to justify that suspicion. It was real yet immaterial at the same time, as if a shadow was behind her every now and then.

Perhaps I am becoming paranoid, she thought, shivering.

At the corner of Via dei Tigli, she looked furtively over her shoulder, crossed the road and stopped in front of a shop. She glanced at the images reflected in the window, but saw no one suspicious. Cordelia became aware of the sound of her footsteps on the stone pavement as she walked on. A couple of Fascists in their black uniforms were stationed at the corner of Piazza Abate so she chose to go around the opposite side, keeping an eye on them. They continued to chat between each other, not seeming to notice her. As she was halfway round, they entered the café on the corner, disappearing into its dimly lit interior.

She walked for about an hour, avoiding the main squares, doubling up a couple of times, only to retrace her steps as soon as she was sure she didn’t have anyone tailing her. She finally arrived on the bank of the river Tiber and crossed it on the Ponte Vittorio Emanuele II. Instead of taking Via della Conciliazione, which led directly to St Peter’s Square, she headed for the side entrance of Porta Sant’Anna, guarded by the Lansquenets, the Papal Swiss Guards, in their glorious medieval striped uniforms. Entering the Vatican, she felt her shoulders relax a bit – she was in neutral territory.

The Holy See and the Republic of Italy had agreed the incorporation of Vatican City as an independent state under the religious and political sovereignty of the Pope with the Lateran Pacts in 1929. Since then, the current head of the Roman Catholic church, Pope Pius IX, with the agreement of Mussolini, had declared the city completely neutral in the matter of all international relations.

At the oratory of Sant’Egidio a Borgo, Cordelia turned right in Via dei Pellegrini and knocked on the heavily carved wooden portal just beside a small stone fountain used for centuries by the pilgrims visiting the Holy City.

Brother Filippo, the taciturn assistant of Father Colombo, an old bald friar, wearing the long dark habit of the Franciscan Order, was quick to open it. He gave her a warm smile and with his gentle, soft voice said, ‘Come in. Come in, child.’ Smiling back, she swiftly entered, closing the door behind her. Once inside, the tension almost instantly abandoned Cordelia. It was as if the imposing oil portrait of a Mary Magdalen with open arms, gracing the simple entrance hall, whispered to her: Welcome. You’re safe here. You can rest now.

‘Father Colombo is waiting for you, Miss Olivieri,’ he said.

They climbed the stone staircase and reached the first floor. Father Colombo was working in his smaller and more private study. The room looked Spartan, with its white walls, an oak desk by the window, and two old armchairs that faced each other in front of a fireplace. A large number of books in various languages and of different subjects were lined up on the shelves arranged across the study. Many were quite old tomes, some ancient. Works varied from, The Confessions of Saint Augustine, to Homer’s Odyssey, Shakespeare’s Othello, a couple of editions of the Kabbalah, and then Stendhal, Dickens, Leonardo Da Vinci, the Koran. Father Colombo was an avid reader. The only sign of luxury was a thick oriental wool rug that a parishioner returning from his pilgrimage in the Holy Land insisted he accepted as a gift.

The whole room smelled of the freshly picked lavender flowers Brother Filippo had placed in a vase sitting on the windowsill the day before.

‘Come here, Cordelia. I am glad you have arrived without delay. Sit down,’ Father Colombo said. ‘I’ve asked Brother Filippo to prepare us one of his miraculously relaxing herbal teas.’

Brother Filippo, an expert in medicinal herbs, smiled, secretly pleased by Father Colombo’s appreciation of his knowledge. He left them and silently hurried to the kitchen to prepare his potion.

Spies, military secrets, and a personal crusade for freedom…
Rome, 1942.

Cordelia Olivieri is a young, determined hotel owner desperate to escape Mussolini’s racial persecution. But as Fascist leaders gather in Rome, Cordelia is suddenly surrounded by the world’s most ruthless and powerful commanders.

In an effort to keep her Jewish heritage a secret and secure safe passage out of Italy, Cordelia forms a dangerous alliance with the British army who want to push the Axis out of North Africa once and for all.
Going undercover, Cordelia begins obtaining and leaking military intelligence to a British agent, hoping the intel will secure her freedom. But the more Cordelia uncovers, the greater the risks – especially for one handsome German Afrika Korps officer.

How far must Cordelia go to protect her identity and secure passage out of Rome?

Cristina Loggia started her career as a newspaper reporter for L’Eco di Biella and La Provincia di Biella, in Piedmont, Italy. After a spell running the press office of an MP, she moved to London, where she worked for several years as a public affairs and media relations professional, advising major multinational corporations on communications campaigns.

Cristina read English Literature and Foreign Languages at the Catholic University of Milan, Italy. Writing and reading have always been her greatest passion.

Lucifer’s Game is her first fiction novel. She currently lives with her husband in Berkshire, United Kingdom.

Rachel Capell is a professional voiceover actress with an MA in Acting and Performance. She has a long-standing professional background in Theatre and the creative industries, where she has been working as director, writer and performer. Rachel’s natural tone is warm, her narration is evocative, with the ability to capture a wide range of tones and emotions, taking stories to a whole new dimension.