Rise of the Zombies 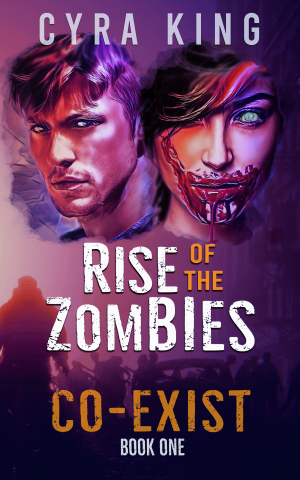 The Salt Lake Temple is a shadow of its former glory. Since the outbreak, Mormon churchgoers praying for salvation have taken refuge elsewhere, while the undead congregate in the vicinity. I’m among them, if not one of them. I like to think I retain most of my humanity. I meditate. Bathe daily and practice yoga. Most importantly, I’m a proud Zegan—someone who swears off live human flesh.

Grady, a resourceful ex-detective and the Z Council Leader’s second-in-command, called for a meeting at eleven a.m., requesting every zombie in town to be present. He meant the sentient ones, of course. Those reduced to drooling, rambling messes or the reanimated corpses are the exception. They’re Empties—lost souls, vacant skulls. These guys have absolutely no ability to think, let alone communicate with us.

As a precaution against air raids, the venue for council meetings always changes. I figured the blast radius can’t be too wide. Or else, the uninfected will end up annihilating their own men. Considering we presently constitute more than eighty percent of the population nationwide, the uninfected must wipe out the whole of America if they want to banish the infection. The rest of the world probably faces the same dilemma.

Today, the assembly takes place at my former high school, Stonecold Academy, a few blocks from the church. The smell of decay, now a familiar scent, lingers everywhere. I lumber through the gates, stepping over a headless, decomposed body. Maggots crawl out of every orifice. Exactly a year ago, I’d have freaked out. Today, however, they make the perfect birthday treat.

The school’s gym is the same place where I marinated in sweat and tears, attending hours of cheerleading practice. In the hallway, the stacks of upturned chairs and tables, broken glass, and bloodstained walls tell a different story. Plastered on the bulletin board are leaflets warning the public of a new and deadly virus, urging any individuals with symptoms to seek treatment immediately. Round the corner, the words scribbled on a locker read ZOMBIES R REAL. I snigger. At least someone got it right.

Squeezing my way through the latecomers milling outside the packed hall, I check the time. My trusty Casio, given by Dad on my eleventh birthday, has Megan Cole engraved on the back, which I suppose will come in handy once I have trouble remembering my name.

I can’t help grinning. No one calls me that anymore except good ol’ Jonathan, the regular drunk in the ER. My old life seems like a lifetime ago. Who would’ve thought we’d be buddies now?

“Over here.” He’s waving his arm so vigorously I’m afraid it may fall off.

I flop into one of the two empty chairs next to him. “Thanks. How’re you holding up?”

Good question. Before coming here, I spent two hours making sure I look my Z best. The previous owner boasted a fabulous wardrobe, not to mention some amazing skincare products. My outfit of the day consists of a floral shirt, skinny jeans, and strappy red heels. Apart from the pale complexion and white irises, you can’t really tell I belong to team Z—which is why I dressed up in the first place.

Mike joked that I resembled a trophy wife, so I strutted around to tease him. One cheeky act led to another. Things got intense and—let’s just say he explored my cave of wonders. In my state of post-coital bliss, I told him to go ahead and save me a seat. Where is he?

More zombies mill into the premises. Grady ambles to the stage, leaving a trail of mucus behind. This will happen to all of us, eventually, as we degenerate further into Empties, though Grady’s mind seems to be working fine, for now.

“Greetings, my comrades and fellow citizens of the Salt Lake Z Community. I see a couple of new faces.” He tips his black fedora to them. “Welcome.”

God knows how he manages to preserve his vocal cords. Everyone ceases talking, probably awed by the richness of his voice. Mr. Snail—I mean Grady—could have done the perfect Z impersonation of Morgan Freeman.

“The purpose of today’s meeting is to report the council’s latest findings on the humans.”

The correct term is ‘uninfected.’ Grady, on the other hand, thinks of us as a whole different species. Not to mention his appalling habit, which he demonstrates by ripping a chunk of flesh dangling from his forearm and shoving it into his mouth. Half-chewing, he intones, “The humans are in the midst of developing a new weapon to eradicate us…”

The way Grady is going, he’ll be nothing but bones in a couple of weeks. My attention drifts to a figure braving through the crowd. 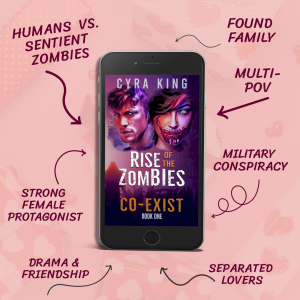 “Where’d you go?” I whisper as Mike eases into the chair next to me.

“Had to run an errand.” He shrugs. Interestingly, he’s out of breath.

I lean closer. “What errand?”

He gives me a Mona Lisa smile and nods at the stage.

“Further information’s unavailable for now. Rest assured, you citizens of the Salt Lake Z Community can sleep peacefully knowing we’re doing everything we can to keep you safe,” Grady says. “Please take extra care when hunting.” His dull eyes sweep around the hall. “Always travel in pairs.”

Or hordes. I stifle a giggle. I have yet to encounter an uninfected after the chaos. Most of their safe zones are cordoned off with electrified fences and guard towers erected around their military base. I make it a point not to get too close. Their snipers are rumored to be rather efficient.

Gripping, horrifying, packed with action and twists. Experience a broken world through the eyes of a sentient zombie. This post-apocalyptic/dystopian romance thriller will make you cry, laugh, and maybe even root for the flesh-eaters.

Double shifts and burnout are all in a day’s work for Nurse Megan Cole. No one’s going to die on her watch. Then a viral apocalypse kills all her patients and turns her into a sentient zombie, forcing her to re-evaluate both her life goals and dietary habits.

Fast-forward a year, the city is ruled by the ruthless Salt Lake Z Council. But with her boyfriend Mike by her side, things are okay—until the Council sends Mike to infiltrate the army. When Megan discovers a mangled corpse days later, her world—and the illusions around it—shatter.

Don Meier, the nation’s top surviving scientist, is close to finding an antidote. However, the final test run is a disaster. The Council gets wind of the ‘cure’ and imposes their sinister agenda under the guise of salvation.

Smack in the middle of mayhem are Megan and her new found friends—a motley crew of conscientious Zegans. While they try to prevent the Council from destroying their only hope, Don risks his wife and son’s safety to unravel a military conspiracy.

It’s a frantic race for Megan and Don to rescue humanity before there’s nobody left to save.

Cyra King enjoys manipulating words to create stories that blur the lines between fiction and reality. “Cyra King” is her alter ego for horror, post-apocalyptic, urban fantasy, and paranormal romance. Her stories often feature dark themes with slices of hope.

Cyra enjoys traveling and going on adventures especially with loved ones (including her furkids). Good food, live bands, and great company are a fabulous trio. She loves movies, music, gaming, reading, and of course, writing.