“It will take days to walk all the way to House Phel,” he pointed out.

Selly nodded, poked with her stick. “If we make it at all.” 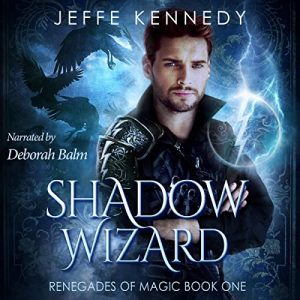 “There are a lot of hazards between here and there,” she explained, sounding as if she were discussing planning a party. “And those are of the natural variety. There also could be more hunters after us or other members of House Sammael chasing behind. They’ll catch you and me before they reach Nic and Gabriel. I thought that’s part of what it meant to be rear guard. You know—Nic and Gabriel don’t have to be faster than their pursuers, just faster than we are.”

“I thought it only meant for that one battle,” Jadren griped, hating that she was right. He didn’t really fancy sacrificing himself. It would ruin his image. Of course, it would also thwart his mother, which was a nice perk right there. “Phel will come looking for us, though—or send people to rescue us. Otherwise he’ll be answering to my maman, which won’t be pretty.” That’s all he needed: his maman to drag him back by the ear to the nightmare of life in House El-Adrel. “Plus, he cares about you.”

She smiled, thin and mirthlessly. “That’s assuming they make it back safely, and that House Sammael doesn’t succeed in destroying them.”

“You’re a regular ray of fucking sunshine, aren’t you?” he growled.

“You don’t strike me as the kind of person who engages in self-deception,” she observed, watching him. “Would you prefer I kiss your pristine high-house ass and promise you all will turn up raspberries?”

“Roses,” he said, after staring at her for a long moment of sheer consternation. “Everything turning up roses is the optimistic metaphor you’re looking for there, you half-feral swamp creature. Raspberries is something else entirely.”

“I like raspberries,” she replied. “They’re juicy and just the right balance between tart and sweet. They also grow in thick clusters, so when I was living in the wild, coming across laden raspberry bushes was one of the best things I could hope for.”

“The charm of having very low expectations.” It rankled at him that she’d celebrated something as trivial as finding wild fruit. If Selly had been born to a proper house, she’d have been dressed in Ophiel silk gowns and feted for her powerful magic. At least, she would’ve been until she manifested as familiar instead of wizard, at which point she’d likely have been slated for the Betrothal Trials. But even that life would have been better than what she’d suffered in this backwater realm.