Hold On To Me

I’m lying on the couch, staring at whatever movie’s on HBO, when my roommate, Dani, walks right in front of the TV and turns it off.

“I was watching that,” I protest.

She just crosses her arms over her chest. “What was it?”

Her chin lifts. “What was the name of the movie?”

I mirror her again. “The… The Broken something.”

It’s only then I notice that Dani’s got backup: not just my longtime friend Violet and her new boyfriend, Nate, but my used-to-be-best friend, Ford. As in, the guy I haven’t really talked to since our fight almost two months ago over a girl that ended up marrying the neighborhood bully from when we were kids.

Violet—never one to mince words or actions—punches me in the arm. “Never bullsh*t a bullsh*tter, Sull.”

“Ow. You can’t punch me. I’m injured,” I say, my voice sounding whiny even to me.

“Not in the arm.” She notices the dog cuddled next to me on the couch. “Skye. Off.”

As Skye slinks off the cushion, Dani says, “You know she’s not allowed up there.”

“She was comforting me.”

Violet sits at the other end of the couch from me, and her ex-enemy/now-boyfriend plops onto the floor at her feet.

“I miss it too, man.” Nate and I met when he first moved to Wallington, and I lent him surfboards because he hadn’t brought his own from California.

Both Dani and Ford take a seat, and everyone stares at me.

“What’s going on? Is this some kind of intervention or something?”

Violet nods, her face grim. “That’s exactly what this is.”

“I’ve been off the drugs since I left the hospital, you know.”

“You also haven’t left the house,” Dani says, ticking a list on her fingers. “You barely get off the couch. You stink. Your muscles are wasting away. You’re obviously depressed, and you’re not doing anything about any of it.”

“Jeez, Dani. Don’t hold back or anything.”

Nate gives her a look. “That was a little harsh.”

“I’m with her.” Violet sends dagger eyes at Ford and Nate, both of whom shift uncomfortably. “You guys may be weenies, but I care about Sully. Nate, tell him what Veronica said.”

Nate clears his throat but when he doesn’t speak, Violet pokes him. “Ow. Okay, okay.” Turning to me, he asks, “Uh, you know Ronnie?”

“Yeah. Tall blonde that does tricks on a short board?”

He nods. “She was asking about you, and I told her about the accident and your broken tibia. She’s a physical therapist and says that you really should be doing exercises every day.”

“I’m not cleared for weight-bearing yet,” I protest.

He shakes his head. “Apparently, there’s a lot you could be doing to strengthen and rebuild all your other muscles. Differing opinions among doctors, I guess, but she said that there’s proven benefits, uh, psychologically as well. Especially if you’re an athlete and used to using your body a lot.”

There’s a long pause while I take in the expressions on the faces of my best friends in the world. Well, almost all of my best friends. One is missing. The one that married that jerk Hardy isn’t returning anyone’s calls.

“Well, excuse me if I am a little depressed.” Their faces are full of concern, but that somehow makes me angrier, so I begin to tick off a list of my own. “I was the victim of a hit-and-run accident. I barely sleep because I can’t get comfortable trying to keep this damn broken leg elevated. The marine police still haven’t found the culprits, so I don’t know what the hell’s up with Endless Summer. Even if I did, I can’t walk, so I can’t work. Meaning, I have no money to even try and fix the boat that I spent hundreds of hours restoring. And if that’s not enough, the stack of medical bills on my desk is so high, I can’t see around it.”

I can’t even bring up the thing that I feel the worst about— the loss of Mr. Jones—because I’m afraid I’ll lose it, so I leave it at that.

“Sully,” Violet says quietly. “You do have every reason to be angry, or sad, or whatever you need to feel. What’s scaring us is that you seem numb.”

“Yeah, man.” Dani rests her elbows on the coffee table and leans closer. “You’ve always been a pretty chill guy, but this is different. You’re like a loggerhead that’s pulled into his shell.”

“You have health insurance from the union, right?” Nate asks. “Aren’t they covering your bills?”

“I do, and I’d really be screwed without it, but still.” I shake my head. “Even the co-pay adds up when you’re talking a percentage of thousands of dollars. And it can take up to a year to regain full use of my leg, so I don’t know if I’ll be able to work enough hours to keep the damn insurance.”

As they all digest the fact that I do have very good reasons to be both angry and deeply depressed, I wonder if and when Ford will speak. He and Nate both packed up their LA apartments to move to Wallington right around the time my boat got hit, but while Ford’s come by, we haven’t talked about anything of substance.

When his gaze skitters over me, I catch it with a challenging look. “You have anything to add, Ford?”

He blows out a breath before speaking. “You really want to hear it?”

“Sure. May as well pile on with everybody else.”

Ford holds up a hand. “Let me say my bit.” He shifts in his chair to face me but doesn’t continue.

“Spit it out,” I say. Possibly growl.

He looks down at his clasped hands. “Maybe because you didn’t go to the wedding, it’s harder for you to let go.” “Let go?”

“Of Whitney,” he says, like I’m the idiot here.

While the faces in this little ad hoc therapy circle are full of what is likely real concern, I’m not ready to admit—even to my closest friends—that it’s a hell of a lot harder to be the go- with-the-flow guy when you’re drowning.

“But Sully,” Violet says, “you are grieving.”

“Of course, I am! I mean”—I fling a hand at my useless leg —“look at that thing. It’s disgusting.” 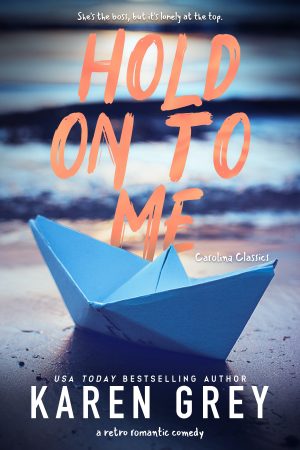 Fans of 1990’s movies like Swimming with Sharks and Beautiful Girls will love this throwback romantic comedy.

While Sullivan Calloway recuperates from a devastating accident at sea, the only employment he’s fit for is a job few have survived.

Time and tide wait for no man. Neither does Helen O’Neill. She’s spent years forging her own path in the movie business. Who cares if her latest assistant is a sight for sore eyes? Expectations cannot be lowered.

If he can’t keep up, he’ll be out on his very fine behind.

If only her heart would get the memo.

KAREN GREY is the pen name for award-winning audiobook narrator Karen White. A stage, screen and radio drama actor in Boston, New York and Los Angeles in the late 20th century, she balanced child-rearing and career for most of the 2000’s. Now, she’s not only emptied her nest of children, she’s taken it and her pets on the road, so she can spend more time with her nomadic TV sound mixer husband. Delighted to occupy her brain with happy-ending stories, she spends the rest of her time baking, and then doing her best to work off the calories. To learn more, come visit at https://karengrey.com/