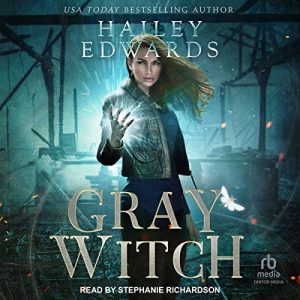 Now that Rue has fully accepted Asa as her mate, she’s doing things a demon princess should – like attend the challenge matches where usurpers fight Asa for his position as heir to the throne. She wins over the masses, but unfortunately captures the attention (and fascination) of Asa’s father, the high king, who won’t take no for an answer.

Rue, Asa, and Clay are called by the deputy director to deal with the ghosts of dead pop culture demon hunters, which leads to other deceased infamous killers and a ring of summoners. This mystery is my favorite thus far! The complexity of the case keeps me guessing along with Rue as to the how’s and why’s. I love that the gang must peel back each layer to figure out what is really going on – and it’s pretty shocking. The overall impact to the entire series is exciting.

I enjoy that the group seems to really hit a comfortable stride in Gray Witch. First, I like that Rue and Asa are a couple now, and even though they are obsessed with one another, it doesn’t dominate the story. There is a better balance between the mystery and the romance. Second, I like watching Rue’s familiar, Colby, spread her wings. Colby is getting extremely intelligent and is of real use to the team. What I don’t like is Rue’s constant mental reminders that Colby is stuck as a ten year old. I don’t understand how she won’t develop mentally or emotionally, especially since we are seeing it as she learns and hones her talents. She may be stuck in an immature body, but she’s not stunted in any way.

Narration: The story is shared via first person POV of Rue. Ms. Richardson uses a strong, confident feminine voice for Rue/the narrator, which suits the character and storytelling. The narrator alters dialogue, giving characters a unique voice, suited to the age, gender, species, etc. Some voices are immediately identifiable, like that for Clay, whose voice is deeper, slower, and large, just like him. I also enjoy Colby, whose young voice sounds a bit cartoonish, which is perfect for the mythological friend. The narrator successfully portrays emotions and has created unique identities for the main characters. However, this time around, I found a few of the new characters had voices that were very similar to the existing main characters, making it a bit confusing at times.

While there are a couple much-too-convenient surprises at the end of the book, overall, I really enjoyed it. Gray Witch is an excellent addition to the Black Hat Bureau series, and with the changes that come about for Rue and the gang, I find I’m more excited about the series and look forward to the next title.

My Ratings
Story: B+
Narration: B/B+

Famous monsters are resurrecting across Mississippi, each one recreating their own gruesome deaths through new victims. Every time Rue pins down one horror legend, another appears with its own bloodthirsty agenda. The summoners raising these vengeful spirits save their best for last, a cruel gift that shatters Rue. But she’s not the only one whose heart gets broken.

Once her father realizes what the summoners have done, who they’ve awakened, there is nowhere they can hide where he can’t find them. After this final betrayal, there are no limits on how far he’s willing to go to bring down Black Hat, the director, and anyone else who gets in his way.

Including his own daughter.