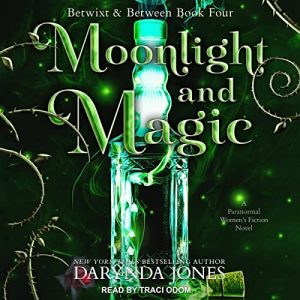 Picking up shortly after the conclusion of the previous book, Moonlight and Magic shifts gears and moves Annette, the previous sidekick character, into the role of protagonist. At first I was totally thrown for a loop that the series changed main characters and the narrator, while still first person POV, is no longer Defiance. I will admit that I didn’t care for it at first, but by the end of the book, I’d been able to wrap my head around the change. Annette and Deph have similar personalities, which is part of the reason I had trouble adjusting to the change.

Now that Annette knows she’s a witch, she heads back to Arizona to visit her mom to find out who her real father is (because now she realizes it isn’t the man who raised her). There is all sorts of trouble brewing back at mom’s, including a condescending cousin, a lost ghost child, an evil stepfather, and a mysterious shadow warlock who may or may not be helping Annette.

While it took a bit, the overall story did grab me. I enjoyed seeing Annette find her own voice and way of doing things as she gains confidence. I love the humor, which remains consistently strong, and there is a fabulous Buffy reference. I liked seeing Annette have a heart-to-heart with her family.

With that said, I had some issues with the story. Although the author gives reasons, I was dismayed that Annette didn’t figure out what was going on with the phantom warlock. Additionally, I felt the lack of police presence at Annette’s mom’s home after what goes down is ridiculous. And the continued lack of security as the book continues bothered me – bordering TSTL (too stupid to live). Additionally, I did not like Annette’s romantic storyline at all, and the sexy times had me cringing. (I have several issues, but I don’t want to give spoilers).

Narration: Ms. Odom provides a delightful performance as the first person POV, 40-something Annette. Although the change in main character threw me at first, I appreciate that Ms. Odom slighted adjusted her voice for the narrator when comparing it to the previous three books, keeping Deph’s voice unique to her character. I found Odom’s array of female characters unique and fitting. Both females and males are adjusted appropriately for age. Overall, her males are deeper, but soft and whispery sounding rather than masculine.

In the end, I liked the start of Annette’s story and mostly enjoyed Moonlight and Magic. I still enjoy the world, although rules sometimes feel a little loosey-goosey. Now that I’m used to Annette as MC, I think the next one will be easier to listen to.

Forty-something Annette Osmund always knew she was psychic. She’s not, but that didn’t stop her from giving those non-existent abilities her all. What she is, however, is a very powerful witch who has just inherited magics she never dreamed possible.

Starting over in a new town with her BFF has been an adventure. Defiance’s status as a powerful type of witch called a charmling has kept Annette busy. But while Deph, a seeker, is still learning to use her magics, to control the power at her fingertips, Annette is overcome with powers of her own. Turns out, her being besties with Deph was not an accident. They were drawn to each other even before their powers emerged, and Annette learns she is also a charmling, a healer, and an alchemist. But what does that even mean?

Fortunately, there’s one way to find out. She consults the house they’re living in. Or, more to the point, the delicious entity haunting the house. Because, like her, he was once an alchemist. Maybe he will have the answers she so desperately seeks before she kills someone. The fact that he was once a stunning specimen of masculinity has nothing whatsoever to do with her desire to learn from a man who may or may not have been a powerful warlock.