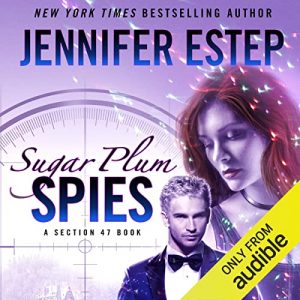 Sugar Plum Spies is the second spy adventure in the exciting Section 47 series by Jennifer Estep. The series features paramortal spies Charlotte and Desmond who work for a secret agency that keeps regular humans safe from those with extraordinary powers. The author infuses the book with amazing descriptions and details, which pulled me right into the the scene and story.

Sugar Plum Spies is a fun Christmas-themed novella set in a snow-bound European castle. Charlotte and Desmond are undercover trying to discover the whereabouts of enemy number one: Henrika Hyde. The couple uses their spy skills and paranormal abilities to try and stop a robbery. Now that the pair has been working together (and spending a lot of time together outside the office), they gel. I love how well they play off one another and trust the other.

The story is quick with a lot of action. I enjoyed the plot and loved learning more about the threats, including Henrika. There were a couple times that I felt the characters weren’t acting like good spies (for example, at the beginning of the story, Desmond, a guest, and Charlotte, a waiter, spend a lot of time chatting and are very friendly). But overall, it’s a solid story.

Narration: The story is shared in the alternating first person POVs of Charlotte and Desmond, with Ms. Laser taking the lead on Charlotte’s POVs and Mr. Black for Desmond. Overall, the story flows well and the narration is strong. Ms. Laser does a great job with Charlotte’s southern accent, and seamlessly shifts to other dialects and accents during dialogue. I really liked her version of Desmond’s Australian accent. She provides plenty of emotion and modulates her voice to suit a character’s gender, age, and persona.

Mr. Black is new to the series and an improvement over the previous narrator used for Desmond. His Australian accented voice is worthy of a Hemsworth. His voice is deep and sexy. He modifies his voice for gender, age, and dialect/accent; however with such a deep voice, his females remain somewhat masculine sounding. He was less successful with his voice for 10-year-old Lena, again because his voice is do deep to start with.

The epilogue is shared via fellow spy Gabriel’s POV. It was a short section, narrated by Lance Danton. I enjoyed his deep, gravely voice. His pacing is a bit slower than the other two narrators. Mr. Danton alters his voice slightly for the mysterious female caller.

In the end, I enjoyed Sugar Plum Spies – reminding me that a little action and excitement is fun at the holidays.

Most spies take a break for the holidays, but not me, Charlotte Locke. As an analyst for Section 47, a secret spy organization, I normally use my magical form of synesthesia to uncover lies and track paramortal bad guys from the comfort of my cubicle. But tonight I’m going out into the field, along with my partner, Desmond Percy, a powerful galvanist.

Instead of enjoying Christmastime in the city, I’m in a German castle, dressed like a toy soldier and masquerading as a waitress at a swanky Christmas Eve party. My mission? To gather information that will help Section 47 track down a dangerous enemy.

Despite the glitz and glamour, I can’t shake the sense that something is wrong—and that Desmond and I might not leave the party alive.

My name is Desmond Percy, although I’ve had many aliases during my years working as a cleaner for Section 47. But I’ve never had a real partner until Charlotte Locke.

My part of the mission is simple: pretend to be a guest and keep an eye on things at the party while Charlotte uses her synesthesia to track down the information we need. But what starts out as a sugar plum dream quickly turns into a holiday nightmare.

Forget the mission. All I want for Christmas is to keep Charlotte safe.