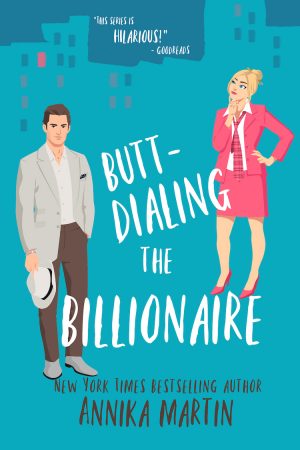 Jaxon Henningsly is the wealthy playboy, race car driving son of uber-successful parents. When his parents die suddenly, he doesn’t mourn their loss (he hadn’t spoken to them in years) and hates that he’s now the heir to their empire. Although he just wants to dump it all, his parents’ company man asks Jaxon to read a prepared speech so that the stocks don’t plummet.

Jada Herberger is the senior designer at SportyGoCo. The once great company was bought out by Jaxon’s family company, which installed a new CEO who Is running it into the ground. Jada is pushed over the edge when they have to stop production on their newest design to listen to Jaxon’s speech. After the call, she makes fun of Jaxon, but unbeknownst to Jada, her coworker sits on the phone, accidentally calling him back, and he hears it all. Now Jaxon is obsessed with finding the butt-dialer and destroying her.

Butt-Dialing the Billionaire was a slow start for me, but in the end, I was blown away. From the start, I hated Jaxon so much I couldn’t see anyway I would like him. Plain and simple: Jaxon is an ass. He goes undercover at SportyGoCo to ferret out the woman who mocked him. He’s cruel, dismissive, and horrible. Jada and the crew write off his lack of basic employee skills and workplace knowledge, assuming he is from some backwater European country, which was completely annoying, as these characters are not stupid and should have been able to put two and two together.

On the other hand, I loved Jada from the get go. She is a ball of positive energy who never gives up on anyone, most especially Jack. She isn’t tarnished by all the roadblocks and negative energy. She works hard and loves fiercely.

The pair fight a mutual attraction from the start. However, Jaxon’s sexual banter bothered me. It is graphic and constituted sexual harassment. When he figures out Jada is the butt-dialer, he uses that knowledge to get a kiss. It’s not okay that she wants to kiss him. His power over her and her life makes the whole thing cringy. However, once she acknowledges what is happening, and in fact enjoys the play, I loved watching the pair come together for real.

The author’s quirky sense of humor, gregarious characters, and zany writing style won me over! I’ve always loved Ms. Martin’s work, but I honestly didn’t think I’d end up loving Jaxon, weeping for him. I adore that the author didn’t draw out the ruse, especially after Jada figures out who Jack really is.

Was Butt-Dialing the Billionaire perfect? No. But I was fully invested in the couple and their HEA. The plot is constantly moving, bringing a powerful energy to the story and romance, making this a great story in the end.

My imitation of our billionaire boss had everyone ROFL. Well…almost everyone. Worst. Butt-dial. Ever!

It was just some silly fun. A goofy imitation of the faceless mega-billionaire who owns our faceless international mega-corporation.

And yes, there was laughter. Possibly a few hoots and screams.

How was I to know that Dave from accounting had sat on the speakerphone, butt-dialing said mega-billionaire? Or that he’d listen to me make fun of him for ten straight minutes.

And now I hear he’s determined to track down the jokester. Me.

But we’re tight like family in this office—no way will my co-workers rat me out, in spite of the pressure from the top. Plus, who brings the cookies? Moi!

Things die down after a few months, and I’m pretty sure I’m safe.

Thank goodness, because I have my hands full with our lazy, arrogant new office gopher. He has the worst work ethic I’ve ever seen—how did he even get hired? He doesn’t know how to work a vending machine, and he’s baffled when we send around a card to be signed for somebody’s birthday. It’s as if he’s never set foot in a place of business in his life.

But little by little, we’re drawing closer. He’s funny. Sexy. Wicked. Still, he’s all wrong for me. I like respectable men with a work ethic.

Also, I can’t shake the feeling that he’s hiding something…