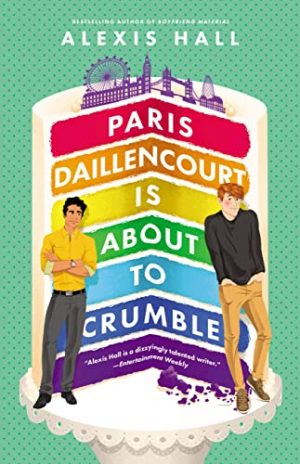 Paris Daillencourt Is About to Crumble
Author: Alexis Hall
Reviewer: B.
Rating: B

As a necessary preface to this review, I strongly suggest readers look at the entirety of the author’s Content Warnings (which can be found HERE) before reading this story.

Paris Daillencourt is in his early twenties, lives in an extravagant flat in central London (bought by his very wealthy absentee parents who abandoned him along with the flat years ago), can count a Dominatrix-ish Glaswegian roommate and a cat as his two friends, and only feels like the world makes sense when he’s baking. So, naturally, appearing on the most popular baking show in the country is exactly the thing he ought to be doing.

Though billed as a “Rom-Com,” readers should be aware that Paris Daillencourt Is About to Crumble has quite a few genuinely funny moments, but I don’t think it’s truly a comedy. In fact, I can’t really call it a Romance, so much as it has “romantic attempts.” To be blunt, this story kind of cracked me in two during parts of the narrative, but I believe it’s very important storytelling, and I’m glad to have read it. I just might need some time before I revisit it.

Ultimately, Paris is diagnosed with General Anxiety Disorder, but the journey to that point was extremely rough, and some readers might have a difficult time with it. Others might find it cathartic. I was just grateful that Paris’ GAD wasn’t minimized, in relation to the portion of the narrative that is devoted to it. For Paris, feeling good seems more like emotional shoplifting. From his perspective, happiness has to be deserved/earned, which he doesn’t/can’t do, so having it (and whatever or whomever is associated with that potential happiness) is surely wrong and is therefore a justifiably punishable offense. Once he entered treatment, I found the story easier to finish.

While Paris’ GAD is the focus of most of the narrative, there are other issues mentioned in the author’s CW’s that I wanted to briefly include here, including, “Islamophobia (challenged), religious and racial microaggressions…[and] cyberbullying.” Paris’ relationship with his parents also made me want to pull my hair out, but addressing everything that all the characters experience (Paris isn’t the only one hurting) is more than I can do in this review.

Now…the fun things! Yes, there are fun things, too. Alexis Hall remains one of the most gifted writers I’ve read, and when something in his stories is funny, I usually laugh hard enough to aspirate whatever I’m drinking at the moment. Thankfully, that is still true in Paris Daillencourt Is About to Crumble. For starters, Jennifer Hallet is back with plenty of obscenities and remarkably imaginative vulgarities which made me cackle at the strangest points in the story. Thank goodness. Colin Thrimp is also here at peak Colin. And Alain is just as punch-worthy in his cameo as he was the first time around, which is always a pleasurable thing to revisit.

Paris Daillencourt Is About to Crumble is not going to be an easy story for everyone. Told entirely from Paris’ POV, there is no outside perspective to balance what he’s experiencing, and that progression doesn’t stop until things become bad. There are no quick cures, no magic potions. Just self-awareness, therapy, and a lot of hard work. Tariq and Paris are also both young and entering periods of enormous change, while still carrying some unresolved hurts and misunderstandings. So, although this ending can be counted as a HFN, I think it’s more accurate to say that it’s Hopeful for Now—which left me feeling more relieved and soul-warm than I’d have thought possible during parts of the narrative, and I very much liked where Paris seemed to be heading.

My Rating:  B Liked It — Recommend

Paris Daillencourt is a recipe for disaster. Despite his passion for baking, his cat, and his classics degree, constant self-doubt and second-guessing have left him a curdled, directionless mess. So when his roommate enters him in Bake Expectations, the nation’s favourite baking show, Paris is sure he’ll be the first one sent home.

But not only does he win week one’s challenge—he meets fellow contestant Tariq Hassan. Sure, he’s the competition, but he’s also cute and kind, with more confidence than Paris could ever hope to have. Still, neither his growing romance with Tariq nor his own impressive bakes can keep Paris’s fear of failure from spoiling his happiness. And when the show’s vicious fanbase confirms his worst anxieties, Paris’s confidence is torn apart quicker than tear-and-share bread.

But if Paris can find the strength to face his past, his future, and the chorus of hecklers that live in his brain, he’ll realize it’s the sweet things in life that he really deserves.

Reviews in the Series:
Rosaline Palmer Takes the Cake by Alexis Hall (Winner Bakes All #1)