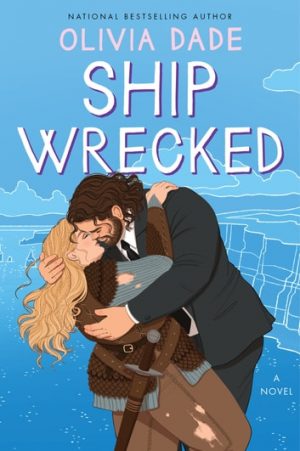 Peter has been working consistently in Hollywood for 15 years, and now he’s finally landed his big chance – he’s going to play Cyprian on the huge hit Gods of the Gates. His leading lady, Maria, a newcomer with little television experience, would be perfect if it weren’t for the fact that they shared an amazing one-night-stand the night before the final audition – one in which she slipped away without a word. Now the pair must work together as castaways on a remote island.

Ship Wrecked is the third title in Ms. Dade’s fabulous Spoiler Alert series, but can be read as a standalone. The books all feature cast from a fictional mega show (think Game of Thrones) and partially overlap in time. Peter and Maria’s story starts well before the previous books in the series, but catches up as the story progresses.

Peter and Maria’s romantic journey takes years to come to fruition. While they start as frenemies (he’s hurt that she left him like she did), they eventually become close friends. There is strong sexual tension, but they don’t want to ruin their working relationship, so they agree not to cross that line. The first half of the book takes place in this “friend zone.” It’s a slow burn, but the progression allows readers to better understand the characters. Maria is very confident and doesn’t need the show to feel successful, unlike Peter who is conditioned not to rock the boat out of fear of losing his job. The show runners are assholes, and this causes tension between Peter and Maria when the show runners make demands on the pair. I like how conflicted Peter is. He’s proud of/fascinated with Maria’s ability to stand up for herself and even him, and he feels awful when he doesn’t do the same.

I really enjoyed both main characters. They are both lovely people, and I loved being submersed in their lives. Their banter is fun and made me chuckle. I wanted to be part of their tight knit group. I love Maria’s self-awareness and courage to stand up for herself. She has insecurities but her weight and lifestyle are not among them.

I liked getting to see Peter and Maria together, both as friends and then as lovers, for so much of the book. They connect so well from the beginning, and even though we had a wait for them to get their HEA, I love that they were together in some capacity for nearly the entire story. When they finally connect, I honestly felt like the book was complete, and it wasn’t even half over. The second half allows the pair to grow as a couple and also face their demons (most of which belong to Peter). It takes a loss to realize what is truly important.

Ship Wrecked is another wonderful story from Ms. Dade. A slow-burn romance that starts with a one night stand and waits six years to finally hook up. I adore Ms. Dade’s ability to create honest characters that I care about. I highly recommend any of her books.

Maria’s one-night-stand—the thick-thighed, sexy Viking of a man she left without a word or a note—just reappeared. Apparently, Peter’s her surly Gods of the Gates co-star, and they’re about to spend the next six years filming on a desolate Irish island together. She still wants him…but he now wants nothing to do with her.

Peter knows this role could finally transform him from a forgettable character actor into a leading man. He also knows a failed relationship with Maria could poison the set, and he won’t sabotage his career for a woman who’s already walked away from him once. Given time, maybe they can be cooperative colleagues or friends—possibly even best friends—but not lovers again. No matter how much he aches for her.

For years, they don’t touch off-camera. But on their last night of filming, their mutual restraint finally shatters, and all their pent-up desire explodes into renewed passion. Too bad they still don’t have a future together, since Peter’s going back to Hollywood, while Maria’s returning to her native Sweden. She thinks she needs more than he can give her, but he’s determined to change her mind, and he’s spent the last six years waiting. Watching. Wanting.