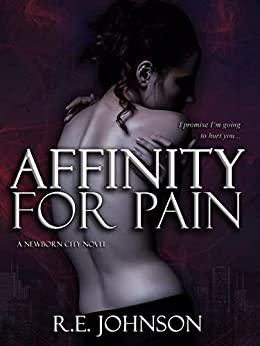 It was so stupid, but Hope knew that if she took his hand, that was it.

If she took what was offered, there was no going back. Her pulse thundered in her ears. She could barely hear herself think. Hope started to sweat and too many sensations flooded her. The memory of the bullet graze, the ache coming from Ciaran’s knee buzzed in her own, the cold air made her skin ripple, the hardwood pushed against her ankle bones, the pressure in her knees from sitting on them. It all pressed down harder and harder.

Then, she took Ciaran’s hand and followed him upstairs.

Hope Turner is the ideal human-hunting assassin, and she is damn good at her job. A daughter of the Chakal, a race of hybrid demons lacking physical sensation and emotion, Hope was always brutally efficient in her work. However, that changed when Hope is assigned to take down Ciaran O-Connor – a stubborn, strong-willed bodyguard with a dark past and severe PTSD.

He also happens to be her soulmate.

When the omaeriku – an inescapable soulmate bond – takes hold of her, Hope is hit with emotions and physical sensation for the first time in her life. Unable to kill Ciaran and ending up on her former boss’s hit list, Hope must escape with Ciaran into hiding. Immediately, the chemistry between Hope and Ciaran is electric. However, they must focus on finding a way to take down Marcus Dentry, their newfound common enemy who was both Hope’s former boss and Ciaran’s former captor and torturer. Can Hope learn how to handle her sudden emotions or will it drive her away from the only person who can make her feel? And can they track down Marcus Dentry before Marcus takes them down first?

R.E. Johnson is an author and copywriter with a major in Professional Writing and minor in Creative Writing. Johnson has been a passionate storyteller and fantasy fan since she was in elementary school. In fact, she wrote her first novel in fifth grade. Now, when she isn’t working, she loves creating stories that profess love, respect, and triumph over evil and contain strong female characters who are always ready to throw down – both in and out of the bedroom. Currently, R.E. Johnson resides in Las Vegas, Nevada, where she spends her free time playing Dungeons and Dragons, wrangles her two rambunctious children, and reads all the smut, fantasy, sci-fi, and mythology she can get her hands on. Check out her newest book, Affinity for Pain, today!