Used by permission from Tantor Audio

Soot-covered gargoyles peered down from their granite perches as Zoe Lorel crossed the dark courtyard. The hazy glow from the illuminated Prague Castle, high above on its hilltop throne, rose behind the stone creatures, giving them an eerie aura. Her contact lenses switched to night vision and the castle’s luminosity became a green supernatural fog ready to envelop the open-mouthed statues.

Her ankle boots crushed discarded foam food containers, and light sockets dangled from the courtyard’s dirt-streaked stone walls, bulbs ripped from their housing by vandals. Red heat images smoldered behind broken glass windows of the supposedly abandoned building where she’d parked her motorcycle and changed into her disguise. Squatters.

Zoe’s hand snaked down to the daggers in her bodysuit’s thigh pockets, and she smiled at the reassuring steel firmness against her legs.

Real nightmares lived in the blackness. 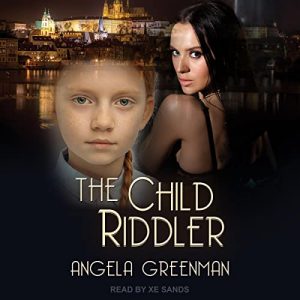 She flexed her left shoulder as she slipped into the back seat of the idling navy blue Skoda parked out front. While she hated humidity, she had to admit it helped keep her shoulder from stiffening up. The left one had been permanently damaged from the brutal beatings at Woodbury, the preparatory boarding school for youth assassins she’d attended.

The Skoda merged into the heavy Thursday evening traffic, and out the front window the massive Prague Castle loomed, spotlights spraying the towering fortress’s stone walls amber and white. From a small, plain silver case in her purse, she took out one oval-shaped pink pill and swallowed. Her spy agency, Global Threat Assessment, supplied her and other field agents with drugs to take when they needed an infusion of ruthlessness for an operation.

A cold wave gushed through her veins as the pill kicked in. A shock—but a good one—for now she was an icy bitch, her emotions in a deep freeze.

A high-octane adrenaline jolt punched her lungs. Intense bursts exploded within her.

Her fingers curled. Whoa. Shane Samson, the deputy GTA director, must have jacked up the drug’s strength a hundredfold. While it irritated her Shane hadn’t informed her about the prescription change, she loved its speedier and more powerful effect.

Perspiration trickled from under her blond wig as she broke out in a hot flash. Zoe wiped her sweaty palms on the gold knee-length chiffon dress she wore over her black antiballistic bodysuit. She hoped this would be it for side effects. A little sweat she could handle.

Beep. From her right earpiece, a headquarters operator said, “Wildcat, be advised. The sale just concluded. Target is in the castle Picture Gallery.”

Over the last year, the IRGC had become aggressive—attacking oil tankers, infiltrating Syria, shooting down drones, and orchestrating bombings. It was a horrifying thought what this wealthy terrorist organization—which commanded almost a million personnel in ground, naval, air, paramilitary, and cyber forces—could do with invisible killer robots.

This lethal technology would change warfare on a global scale.

“Copy that, Falcon,” she said. GTA Operations Center, with its high-tech equipment that homed in on its targets within seconds, had been code-named after the world’s fastest bird of prey—the peregrine falcon—which could dive at two hundred forty miles per hour.

Falcon also kept its operatives within its sweeping gaze. In addition to communication capability, her right earpiece had GPS, so headquarters could track her every movement—live.

The Skoda came to a halt in Hradcany Square, the main entrance to the Prague Castle. The red digital numbers of her watch beamed up at her: 8:00 p.m.

She had two hours to assassinate Mitropoulos before his driver picked him up.

Zoe slipped her purse’s shoulder strap across her chest and stepped from the car. Two hours or two minutes, it didn’t matter. She’d get him. No way would she let another innocent person be maimed or killed by her bastard terrorist prey. The pain-filled and lifeless faces she’d stared at in videos, year after year in agency briefings on extremist attacks, continued to haunt her.

Especially the ones of wide-eyed children.

Despite the angry scars she carries from her childhood training, Zoe Lorel has reached a good place in her life. She has her dream job as an elite operative in an international spy agency and found her true love. Her world is mostly perfect—until she is sent to abduct a nine-year-old girl. The girl is the only one who knows the riddle that holds the code to unleash the most lethal weapon on earth—the first ever “invisibility” nanoweapon, a cloaking spider bot.

Zoe’s agency is not the only one after the child. China developed the cloaking bot and will stop at nothing to keep its code secret. While China rapidly hones in on Zoe, her threats grow. Enemies in Austria and Bulgaria reveal the invisibility weapon’s existence to underground arms dealers—now every government and terrorist organization in the world want the nanobot.

From Malta to the Italian Alps to England, Zoe races to save not only the child she has grown to care about, but also herself. Her drug addiction is threatening her engagement to the one person who brings her happiness, yet she needs the agency prescribed pills. They transform her into the icy killer she must be to survive. Can she still be ruthless without the chemicals that suppress her emotions?