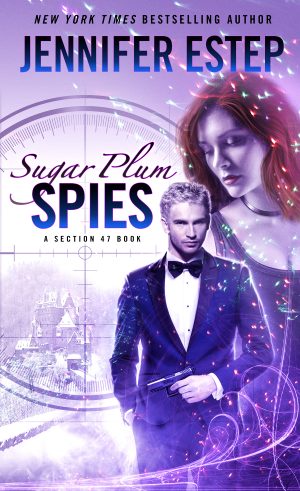 You could always tell the criminals by their toys.

Fancy cars, enormous yachts, private jets, expensive art. In my experience, most criminals loved showing off their ill-gotten goods. To many, it was a badge of honor, a not-so-subtle way of showing everyone else, especially their rivals, just how smart, rich, strong, and successful they were. But paramortal criminals—those with magical abilities—tended to be a little flashier and more boastful than most, with toys that were much more lavish.

I stood in the back of the grand ballroom, which took up a good portion of the sprawling castle’s second level. Crystal chandeliers bathed the ballroom in a soft, warm glow, highlighting the white marble floor and colorful wall tapestries, while thick strands of fresh evergreen garland studded with silver bows swooped along the second-story balcony like ribbons of icing on a tiered cake. High above the decorations, silver leaf swirled through a gorgeous ceiling fresco of a snow-crusted forest before dripping down onto the evergreen-tree-shaped crown molding like metallic icicles.

The pictures I’d seen of the ballroom didn’t do it justice, but what made it truly special was the theatrical stage that dominated the front of the cavernous space.

Detailed mosaics of stars, snowflakes, and evergreen trees had been set into the base of the mahogany platform in a mirror image of the ceiling fresco, and bits of stained glass gleamed like diamonds, sapphires, and emeralds in the dark wood. The stage was framed by white marble columns wrapped with red ribbons that twirled up like peppermint sticks to support a broad stone cornice studded with even more white stars, blue snowflakes, and green trees that capped the entire area like a sparkling crown.

Stairs at either end led up to the performance platform, and the heavy blue brocade curtains had been drawn aside to reveal a lovely holiday scene, anchored by a thirty-foot-tall Christmas tree at the back center of the stage. Thousands of white lights snaked through the branches, which were adorned with silver stars, blue snowflakes, and red bells.

Oversize gold presents trimmed with blue, red, and green bows were clustered around the tree, while six-foot nutcrackers clutching everything from candy canes to silver bells to pine-cone wreaths were lined up along the night-sky backdrop. A single twelve-foot nutcracker grasping a real silver sword was positioned on the right side of the stage, while smaller nutcrackers were spaced along the ballroom floor as though they had leaped off the platform and frozen where they landed.

A ballet troupe was set to perform scenes from The Nutcracker as part of tonight’s Christmas Eve party, and the castle’s decorators had fully embraced the theme. I eyed a cluster of three nutcrackers standing a few feet away. With their shiny black hats, painted-on mustaches, fluffy beards, and oversize teeth, the holiday figures looked like grinning, maniacal monsters that would cheerfully bite anyone who got too close to them—

Fingers snapped in front of my face, startling me out of my snide reverie, and a man wearing a black chef’s jacket glared down his nose at me. He was about ten years older than me, in his mid-forties, with dark brown hair and eyes, ruddy skin, and a thin mustache that bristled with annoyance.

Jacques gave me another suspicious glare, then moved on to critique the rest of the waitstaff. In keeping with the Nutcracker theme, we were all dressed alike in short royal-blue jackets trimmed with gleaming silver buttons, along with tight white pants and knee-high black boots.

I slid my index finger underneath the chin strap that secured a black brimmed hat to my head, then reached up and dug that same finger into my hair. I hated hats. They always made my head itch, but disguises were a way of life for spies like me. At least the boots were somewhat comfortable, although I would have preferred to wear my usual sneakers. You never knew when you might have to run away from an enemy.

Most spies take a break for the holidays, but not me, Charlotte Locke. As an analyst for Section 47, a secret spy organization, I normally use my magical form of synesthesia to uncover lies and track paramortal bad guys from the comfort of my cubicle. But tonight I’m going out into the field, along with my partner, Desmond Percy, a powerful galvanist.

Instead of enjoying Christmastime in the city, I’m in a German castle, dressed like a toy soldier and masquerading as a waitress at a swanky Christmas Eve party. My mission? To gather information that will help Section 47 track down a dangerous enemy.

Despite the glitz and glamour, I can’t shake the sense that something is wrong—and that Desmond and I might not leave the party alive.

My name is Desmond Percy, although I’ve had many aliases during my years working as a cleaner for Section 47. But I’ve never had a real partner until Charlotte Locke.

My part of the mission is simple: pretend to be a guest and keep an eye on things at the party while Charlotte uses her synesthesia to track down the information we need. But what starts out as a sugar plum dream quickly turns into a holiday nightmare.

Forget the mission. All I want for Christmas is to keep Charlotte safe.

Note: Sugar Plum Spies is a 47,000-word book. It is book 2 in the Section 47 series, but it can also be read as a stand-alone holiday adventure.

Jennifer is also the author of the Galactic Bonds, Elemental Assassin, Crown of Shards, Gargoyle Queen, and other fantasy series. She has written more than 40 books, along with numerous novellas and stories.