Audiobook review: Pregnant by the Playboy by Jackie Lau 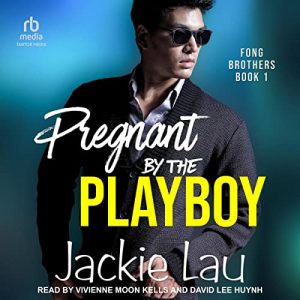 Vince Fong is a self-made tech genius who burned out a few years ago and is living an empty life. He is the younger brother of Julian (Mr. Hotshot CEO). Vince is tired of his party-filled life style and wants to find meaning and fulfillment.

Marissa is ready for a night out after going through a health scare with her mother. She attends one of Brian’s parties with a friend, looking for a night of fun and action. After spending an amazing weekend with Vince, she doesn’t plan to see him again, until she learns she’s pregnant with his baby.

Pregnant by the Playboy works because both characters are in a place where they are comfortable with the idea of settling down and having a baby. Vince is already in an unsettled/unhappy place, knowing he is missing something in his life. After seeing his brother get married and have a kid, he recognizes this is what he wants for himself – he just needs to convince Marissa of this truth. Marissa has always wanted kids, but only if the father was part of the picture. She’s content having the baby with Julian as part-time help. She never had her dad growing up, and this influences her in so many ways. She wants Vince in the baby’s life, but also she sees things as mom-and-baby-against-the-world, which blinds her to what Vince could be for them both.

Although Vince has done “lots of stuff,” he’s not a wild, untrustworthy man. I like that he respects Marissa’s space and choices, yet still makes his desires for her known. Over time, Marissa begins to see that he’s really a good guy and maybe she can have a relationship, and I appreciate that she doesn’t want to muck it up with sex (yet). I love that the author continues to creates non-traditional characters and romances. I love that Marissa struggles with her emotions and feelings for Vince, not ready to jump into “I love yous” and must take her time.

Narration: The story is shared via the alternating first person POV’s of Vince and Marissa, with David Lee Huynh reading Vince’s POVs and Vivienne Moon Yi performing Marissa’s POVs. I continue to struggle with the first person narrative, which just doesn’t sit well with me. It’s like I’m being told the story rather than participating. However, this is the third book I’ve listened to in the series, and over time I’ve grown accustomed to the pairing and performances. DLH uses a neutral male voice, free of any significant accent for Vince. VMY is bubbly and upbeat for mom-to-be Marissa. Both successfully alter dialogue for gender and age. Both infuse their first person narrative with emotion. Once in a while, I struggled to distinguish when a character was speaking to themselves or out loud. Their performances are solid and overall a good fit.

In the end, I continue to enjoy Ms. Lau’s Toronto-based romances. I like that each features a character or relationship that is a little bit different from the norm. Vince and Marissa are a good match, and I enjoyed seeing their one-night stand blossom into love and a family.

I’ve got a pretty great life, if I do say so myself. I made a fortune when I sold my tech start-up, and I’ve spent the years since partying, drinking, and inviting a parade of women into my bed.

I should be happy, but I feel an annoying lack of fulfillment, and there’s no way I’m going back to the work I did before.

At a friend’s party, I meet Marissa. We have hot sex against the door and agree to spend the weekend together. Just one weekend. I never expect to see her again.

Except now she’s pregnant with my baby…and I think this is the solution to all my problems. This is what will bring meaning to my life. I’m going to be a devoted father and husband.

Marissa—whose last name I still don’t know—wants me to be involved, though she rejects my marriage proposal. But before the baby arrives, I’m going to prove to her that I can be something other than a playboy.

And the rare times I set my mind to something, I don’t fail…