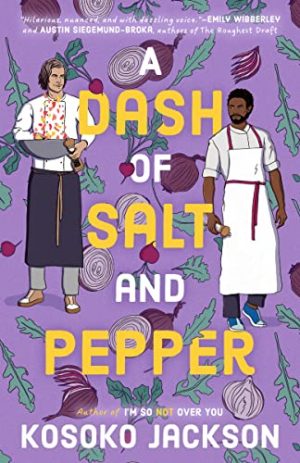 A Dash of Salt and Pepper
Author: Kosoko Jackson
Reviewer: B.
Rating: B+

In the small town of Harper’s Cove, Maine, there are two types of people: those born there who never want to leave, and those who were not born there, but also never want to leave. Xavier Reynolds doesn’t fit into either category. A victim of his own interrupted trajectory, he is the newly-single, reluctant prodigal, eager for his next escape from a familiar place forever in stasis. Except, quite a lot has changed in the years since he left…especially himself.

Although A Dash of Salt and Pepper has two main characters (Xavier Reynolds and Logan O’Hare), it is told exclusively from Xavier’s POV, and is essentially his story. It took me a little while to take the narrative seriously, given that its opening scene is anchored by a pratfall-laden introduction that’s made for laughs. It isn’t until Xavier’s fondness for Harper’s Cove becomes more obviously contradictory to his initial sentiments about the place that it delves into something warmer and more compelling.

One thing I really liked about this story—and I regret that it took most of the narrative for it to occur to me—is that A Dash of Salt and Pepper is a very grown up romance. Despite the neon pop culture drops and occasional retrospective petulance, Xavier and Logan are building a relationship that’s worth investing in. Significant mistakes are made on both men’s sides, but they’re not childish ones. Rather, they originate from genuine concern, painful experience, and hope.

As often happens, the secondary characters in A Dash of Salt and Pepper ended up being my favorites. Mya (Xavier’s best friend since childhood), and Anne (Logan’s fourteen-year-old daughter) pretty much owned every scene they were in. Anne is absolutely fantastic, and the mutual understanding that quickly develops between her and Xavier was nice to see. Angelica and Kyle (Logan’s employees at his restaurant) were also welcome additions each time they appeared, providing most of the humor in the second half of the book.

A Dash of Salt and Pepper is one of the more surprising novels I’ve had the opportunity to read this year. While I had some trouble with the measuring of time (most likely my fault) and a couple of other things, I ended up enjoying Xavier and Logan’s story a great deal. Also, Xavier and Logan really are “the good kind” of cute together, and keeping my fingers crossed for them was easy. In truth, I thought A Dash of Salt and Pepper could have gone in another direction entirely towards the end, and everything still might have turned out okay—which I very much appreciated. I’ll definitely take the happy ending, though.

Xavier Reynolds is doing less than stellar. He just got dumped, was passed over for a prestigious fellowship, and to top it all off he’s right back home in Harper’s Cove, Maine (population: 9,000). The last thing he wants to do is to work as a prep chef in the kitchen of the hip new restaurant in town, The Wharf. Especially since the hot, single-father chef who owns it can’t delegate to save his life.

Logan O’Hare doesn’t understand Xavier or why every word out of his mouth is dipped in sarcasm. Unfortunately, he has no choice but to hire him—he needs more help in the kitchen and his tween daughter, Anne, can only mince so many onions. It might be a recipe for disaster, but Logan doesn’t have many options besides Xavier.

Stuck between a stove and a hot place, Logan and Xavier discover an unexpected connection. But when the heat between them threatens to top the Scoville scale, they’ll have to decide if they can make their relationship work or if life has seasoned them too differently.