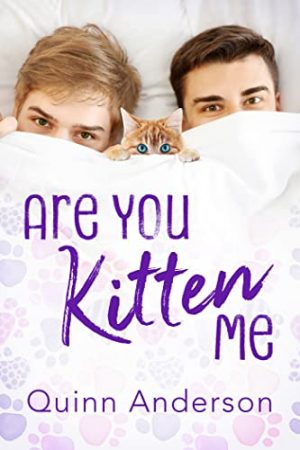 Are You Kitten Me
Author: Quinn Anderson
Reviewer: B.
Rating: B-

After a couple of false starts, Shane Maguire has finally finished culinary school, found a job at a prestigious restaurant, and gotten his own place (and off his parents couch). And, while he is proud of his independence, it doesn’t help with the fact that he’s lonely. With a little nudge from his father, Shane is sure that a visit to the local shelter will be exactly what he needs. A puppy will be a perfect fit. Or maybe a fluffy, red kitten instead…

Damian Murphy has an apartment to himself, a job he likes, and a mother and sister who love him just like he is. But, after several tough losses he’s finally ready to visit his local animal rescue to find his ideal new companion. With so many kittens in need of a good home, there’s bound to be one that’s right for him. He’s done this before so there shouldn’t be any surprises, should there?

If you’re looking for a cute story about two cute guys rage bonding over a cute kitten, this one might be just the thing. Are You Kitten Me is a sweet, easy tale that isn’t too complicated, and didn’t try to be more than it was meant to be. There’s enough mayhem to keep things lively, and the chemistry between the two main characters is so obvious that I knew immediately what I was in for. Sometimes a guaranteed happily ever after is what a reader needs, and this story delivers pretty well.

Despite having the above in its favor, Are You Kitten Me was still a lot to handle in a couple of places. While not an overly long story, the “kitten-as-matchmaker” premise relied on a good bit of repetition in the first part of Shane and Damien’s attempts at feline co-parenting. And, as much as I liked Shane and Damian, their respective extremes were somewhat overwhelming at times. I can say that it was a relief when they finally started getting things together.

In addition to the romance and kitty shenanigans, there were other things I liked about Are You Kitten Me worth mentioning. While Damian’s past is definitely the biggest impediment the two characters face, I didn’t feel that the author was trying to force a sense of empathy with him. And once Shane settled down a little bit, he was a really fun character—kind of like a ricocheting bouncy ball, but fun.

With a title like Are You Kitten Me, I expected something light and sweet, and that’s precisely what I got. Though there were some rough spots along the way, Damian and Shane are imperfectly good for each other. I think this new-to-me author did well by her characters, and I’d definitely be willing to check out more stories in her catalog when I can.

Shane Maguire is over-stressed and under-loved. He’s finally landed a respectable job at an upscale restaurant, but the brutal hours have butchered his chances at romance. When his dad suggests he fill the void with a pet, Shane agrees and falls head-over-heels for a gorgeous shelter kitten. There’s only one problem: the handsome stranger who claims he saw her first. They can’t both adopt her, so Shane proposes they share custody . . . of a cat. What could go wrong?

Damian Murphy used to love working from home, but prolonged isolation has made the passing days a blur. He hopes his adorable new tabby will shake things up. Now if only Shane would stop insisting she’s their cat and disappear already, same as all the other men in his life. But the more time they spend together, the harder it is to deny their smoldering chemistry.

Meatball is a kitten. She is very cute, which is important because of reasons. For such a little cat, Meatball has big problems. Her dads are in denial, and as much as she enjoys watching them dance around each other, they need a claw in the right direction. If the three of them are going to be a real family, someone will have to play matchmaker. And Meatball is just the intrepid kitty for the job.