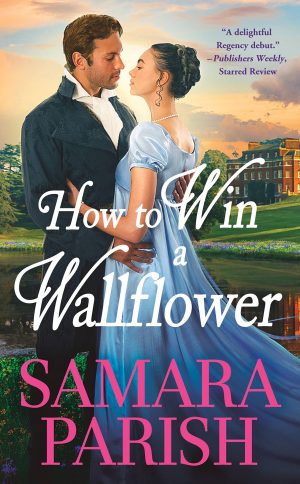 How to Win a Wallflower
Author: Samara Parish
Reviewer: Jen
Rating: B

Note: While I read the first book in this series, I apparently missed the second title which sets the scene for How to Win a Wallflower (the main female character in this title is related to the couple from book 2). Although I missed out, I had no troubles following the story.

Walter Barnesworth was a well-liked scoundrel who ran his estates into the ground and left huge debt after he passed suddenly. Now his younger brother John inherits the title and debt, but all he wants to do is return to his quiet life in Boston rather than deal with the ton of London.

Charlotte, darling of the ton, is the younger sister of John’s best friend, Edward Stirling, Duke of Wildeforde. She has always had a crush on John, and now that he’s returned, she hopes to catch his eye, even against the wishes of her brother.

How to Win a Wallflower starts slowly but gains momentum. I loved seeing John and Charlotte get to know one another and figure out that they are better together. He helps her realize she’s not selfish if she wants to take time for herself; she helps him realize that not every aristocrat is a horrible person. They both are so happy together, even when just being friends. Their schemes to raise funds for John are a bit crazy and dangerous, but it’s part of the story and works. I’m glad that they realize the folly of their schemes and eventually stop (after he learned a hard lesson). I was a bit frustrated that there seemed to be a mystery brewing early on, but then it is dropped for much of the story.

There is a huge plot twist that I didn’t see coming and probably should have. It had my heart racing, and I couldn’t stop reading until I knew the couple was together safe and sound. My heart broke for the pair and for each as individuals, which ended up connecting me to their happiness strongly. I also like that those who wrong them get their just desserts, while the pair doesn’t soil themselves in the process.

The ending of the story is too drawn out and ridiculous. It’s fine for what happens to happen once, but then it just goes on and on, bringing the rating down a bit.

Overall, How to Win a Wallflower is an enjoyable read. It took a bit for me to become invested but then I hit a point where I couldn’t put it down.

When John Barnesworth inherits unexpectedly, he abandons his solitude and returns to London to settle his brother’s affairs, only to discover his estates are crumbling and he is now betrothed to his brother’s unpleasant fiancée. Her dowry might save him from ruin, but at what cost? His only hope lies with the vivacious, charming Lady Charlotte Stirling, whose audacious solution to John’s troubles might actually work. If only he can keep his feelings for her out of the equation . . .

Lady Charlotte Stirling knows she can’t fall for John. He’s her brother’s best friend, he’s engaged to her mortal enemy, and he wants to return to America. Not to mention he’d never survive in her bustling social life. She can, however, try to solve his money problem. But the closer she gets to ensuring his freedom, the harder it is to let him go . . .

Reviews in the Series:
How to Survive a Scandal by Samara Parish (Rebels with a Cause #1)