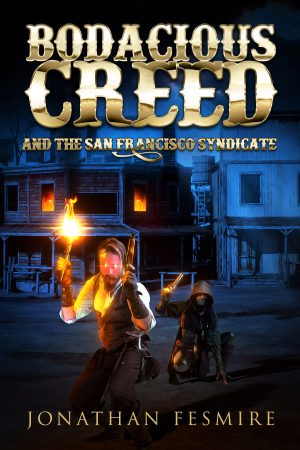 The fireworks continued whining, whistling, booming, and crackling over the waters, flashing the Presidio with red, white, and blue lights, with an occasional green thrown in for good measure.

An unintelligible tirade came from Creed’s left and, at the same moment, he spotted a metallic flash from that direction. He snapped his gaze toward it, then realized the shouting was in Mandarin.

A man in dark clothes—Creed guessed he was Chinese based on the shouts and the thin braid hanging from the back of his head—was pointing back toward the city and away from the fireworks. He must have realized few would understand his warning, because he then cried out in English, “Thief!”

Shouts and screams came from the crowd in the direction he was pointing as people stepped back. Creed saw where the suspect was heading and ran to intercept the perpetrator.

When he was seconds from reaching the stranger, Creed spotted details: a young man with a billy club at his hip and something moving in his arms. People lurched back, and Creed caught a faint smell of the oil used to grease gears or steely parts.

The thing in the man’s arms made chirruping sounds and swatted at the man’s face. Then a head popped up from his arms—shining silver with a little red fez on top—and bit the man’s neck.

“Ya little…!” the would-be thief shouted.

When Creed was close enough, he grabbed the man’s left arm and yanked him to the ground. The thing he’d been holding leaped, the fez flying from its head.

The creature surprised him. It was a monkey made of steel and hickory, dressed in a red jacket. A monkey steely? Morgan’s Automatons sold humanoid and canine steelies, but this was new. He watched the animal automaton land on the ground and dash through the crowd and back toward the Chinese man.

Creed turned back to the hoodlum, but the man was now ten feet away, the crowd separating as he ran, and the investigator sighed. It seemed a better use of his time to make sure the owner got his steely back than to go after this petty criminal.

“What was that all about?” a woman said as Creed passed her on his way to the owner. The man was now standing apart from the crowd, the monkey on his shoulder. He held a hand up to his mechanical pet, and the monkey held onto his index finger.

This lean Chinese fellow appeared to be in his twenties, his queue hanging over his left shoulder, the monkey clinging to his right. He turned to face the investigator.

“Mr. Creed, thank you for retrieving my property! I don’t know how to thank you.”

Creed looked over at the Chinese man. “Have we met?”

“Yes,” he said, his English perfect. Creed suspected the young man had grown up in San Francisco—or, at least, in California. “During the riot, you protected me and others. I believe you saved our lives. I’m, ah… I’m Wu Wen.”

Creed tilted his head. “You’re one of Wu Tingfeng’s children?”

Wu Tingfeng led the Wu Cai Tong, a Chinatown gang that ran several cow yards—cheap brothels where Chinese girls and young women worked as prostitutes. Creed clenched his jaw but held back his anger. He did not know how much the young man had to do with his father’s business, and since last year, he and Tingfeng had established an uneasy truce.

“Your steely. Where did you get it?” Creed asked.

Wen glanced at his automaton primate. It was well built and artistic—and undoubtedly expensive. While auto-sapient steelies bore only the roughest facial features of humans, the steely dogs—auto caninus—and the one steely horse Creed had seen—auto equis—had heads and bodies closer in appearance to the real animals. Creed supposed a steely with a realistic human face could be off-putting, if not downright horrifying. The young man’s automaton companion had a well-sculpted face that made it look like a real monkey, including a short beard made of hickory. Small plates slid together to form its expressions.

“Mr. Creed, are you going to arrest me?”

“What? No.” Creed handed Wen the fez, which he put on the monkey’s head. The faux animal chirruped as he tied it under the chin.

Of course, why wouldn’t Wen ask? Thanks to Miles Morgan, the strange pet was probably illegal, unless the manufacturer had paid Morgan an exorbitant fee for the right to innovate it.

Wu looked down while the automaton patted the back of his head. “There’s a shop in an alley off Kearny, on Graystone Row. The shop itself has no sign. It’s at, ah… they sell tobacco, whiskey, brandy, and other spirits, and if you ask for animal steelies, they’ll sell them to you. Maybe not to you, though, Mr. Creed.”

“It’s underground, then. Not strictly legal.”

“Do they just sell the monkeys?” Creed asked.

“Oh, no. I saw little dogs, but not like the ones Morgan sells. Cats of many sizes. Birds—though they don’t fly well. Too heavy. The butterflies do.”

Creed scratched his beard. “What about spiders?”

“Yes! He showed me one of those. The body was bigger than my fist—both fists! But, I don’t know who would want one of those.” He gave a quick shiver.

“Thank you,” said Creed in Cantonese. “Enjoy your night.” He tipped his hat.

“Wait!” the man said as Creed turned. “Don’t tell them I sent you if you go.”

Creed gave Wen a reassuring smile. “I wouldn’t do that, Mr. Wu.”

He returned to his friends.

It seemed it was a good thing Creed had come after all. He didn’t expect to find a lead, but there one was, anyway. Gregg’s organization had dabbled in resurrection, controlled people with machine parts, and made a wide range of gadgets. Evidence suggested a steely that moved like a spider had assassinated Ginger Guo. If any organization had the means to manufacture unique automatons, it was the Evil Eye Syndicate.

“I’ll tell you later,” said Creed and gazed at the exploding lights above the bay. He forced himself to breathe steadily.

Click HERE to read a Snippet from the second book in this series.

Investigator James Creed has finally settled into life in San Francisco with his found family, the Brotherhood of the Golden Cog. Though he misses his adult daughter, he has a criminal leader to track down—an outlaw who murders innocents, enslaves the downtrodden, and uses machines to alter the bodies and minds of his many victims.

Months ago, the leads dried up. Creed despairs of ever collaring his enemy, the infamous outlaw Maxwell Gregg, until he spots an illegal automaton on Christmas evening. It’s exactly the sort of technology his nemesis deals in.

The clues keep coming. Mechanically enhanced women stalk the red-light district of the Barbary Coast, and a young rancher leads Creed to the site of a mass grave. Known members of the Evil Eye Syndicate are spotted during the day.

Creed gains an unexpected ally—the mysterious Dockside Poltergeist, a vigilante who stops kidnappings and murders along the Barbary Coast. Now, the two are intent on Creed’s target. But, time is running out and there are dark forces also hunting the undead investigator—forces intent on putting him back in his grave.

Can Creed stop his nemesis before the outlaw catches up to him? 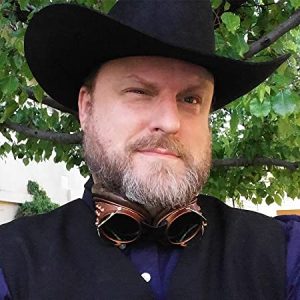 Jonathan Fesmire is a happy author of speculative fiction. While he loves a variety of genres, including high fantasy, hard sf, and superheroes, the niche steampunk western genre has a strong grip on his imagination. Hence, the Creedverse was born.

A single father, Jonathan lives in California with his son. They enjoy going to movies, to Disneyland when possible, and play guitar together most evenings. Early in the covid pandemic, Mr. Fesmire took up the hobby of resin 3D printing. He enjoys printing, and painting, miniatures and dice towers when he has the time.

As an author, one of his goals is to write and publish at least one novel per year, and with “Bodacious Creed and the San Francisco Syndicate,” he’s come close.