The Case of the Disappearing Beaune

Author: J. Lawrence Matthews
Publisher: Not Making This Up LLC
Release Date: September 1, 2022
Series: A holiday follow up to the first book, One Must Tell the Bees
Genre: mystery/historical fiction 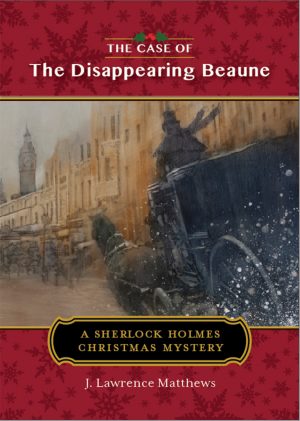 I had barely taken my seat in the hansom cab, the heavy wine bottle stored safely in my coat, when the cab abruptly lurched into motion and we proceeded at a brisk trot up Parliament Street towards St. Pancras Station.

The bottle had once contained a fine red Beaune, intended as a Christmas gift from Sherlock Holmes to me, Dr. John H. Watson, but somebody had entered Holmes’s rooms during the night, decanted the wine and filled the bottle with a coarse dirty sand. More ominously, a handkerchief belonging to the newly crowned King of England, Edward VII, had been thrust into the neck in place of the cork.

Sherlock Holmes and I were now on a race to the royal family’s Christmas home at Sandringham to find the meaning of that sand in the bottle.

Holmes sat back in the cab and stared out the window, muttering to himself as we whirled through Trafalgar Square.

“But why an entire bottle of sand? Surely any amount would have sent the same message….”

We were flying up the Charing Cross Road when the traffic halted for a coal-wagon that was stopped outside the old Morland Hotel, making its delivery. As we idled, our hansom was approached by a woman in Salvation Army uniform collecting for the poor. Holmes impatiently dropped a coin in the jar and slumped back in the seat, but his attention had been drawn to the flag of Denmark flying above the entrance to the hotel, which in those days housed the Danish Club of London.

Gathered beneath the flag could be seen the woman’s compatriots, singing a Danish Christmas carol. They were quite good, being expertly led by a costumed, white-bearded Santa with a clear, beautiful tenor voice.

“Is your cap precious to you, Watson?”

“I beg your pardon?”

“Your cap. I perceive you did not wear your best this morning.”

“Well, no. Margaret thought my old faithful was getting a bit ragged, so she brought it to the shop for mending. I found this one instead.” I removed the battered felt cap and studied it rather ruefully. “You’re concerned I won’t look presentable for King Edward at Sandringham?”

“No. I’m concerned about what’s inside that wine bottle.” Holmes took my cap and placed it upside down on the floor of the cab, then stretched out his hand. “Now, Doctor, the bottle.”

I placed the heavy object in his hand. But instead of examining it with his lens, as he might have been expected to do, Holmes turned the bottle over, pointed the neck at my cap upon the floor and began shaking it, quite violently, too! Dirty clumps of sand dropped into the cap between our feet as the cab started up again.

“What are you doing, Holmes?” I cried, holding on as the cab resumed its ride up the Charing Cross Road.

He ignored my question and continued shaking out sand until a quantity had been released. Then he stopped and peered into the neck.

Once more he turned over the bottle and repeated his frantic efforts, spilling out the contents like a child, without any regard as to the consequences to my poor cap.

“Holmes! May I ask what you are doing?”

“The sand, Watson! The sand!” he cried, once more righting the bottle and staring into the neck. “What else is in this bottle besides sand?” Then, shaking his head in disgust, he resumed his attack upon my poor cap!

Holmes continued in this fashion, alternately emptying the bottle and peering inside it as the cab continued its journey, until the pile rising from my cap had grown several inches high and the contents within the bottle had diminished to no more than a tablespoon.

Finally, he gave the bottom of the bottle a good thump with his free hand, causing a small, dirty item in the shape of a slender bean to pop out of the neck and onto the mound of sand.

After handing me the empty bottle, Holmes picked up the object in triumph, rubbed it clean and held it to his eyes.

“Not much of a prize,” said I, shrugging my shoulders. “It looks like a dirty almond.”

“It is an almond. The almond. From the Risalamande!”

“The Risalamande. Rice pudding, the traditional Danish Christmas dessert. A single almond is mixed with the pudding, and whoever finds the almond in their serving gets an extra helping.”

“And you thought you might find one in the bottle?”

“I knew I would find it. Once I saw the flag and heard that tenor singing the old Danish carol, I remembered.”

Holmes fixed his eyes upon me and spoke with peculiar gravity. “Alexandra, the Queen Consort, is a Dane, Watson.”

“Why, you are right, Holmes! But what does it mean?”

He placed the small object in his watch pocket and resumed his gaze out the window, his face a mask of concern.

“It means, I fear, that whatever threat is indicated by this bottle, it is not reserved for the King only,” he said, slowly and severely. “It means an attack upon his entire family. Perhaps upon the very line of succession.”

Our cabman, however, had other ideas.

Christmas morning 1902, London, England. A bottle of fine French wine from the Côte de Beaune region of France, intended as a gift from Mr. Sherlock Holmes to his old friend Dr. Watson, is found to have been drained of its aromatic spirits during the night and filled with sand. But not just any sand….

J. Lawrence Matthews has contributed fiction to the New York Times and NPR’s All Things Considered, and, as Jeff Matthews, is the author of three non-fiction books about Warren Buffett and Berkshire Hathaway. One Must Tell the Bees: Abraham Lincoln and the Final Education of Sherlock Holmes is his first novel, the result of twin passions for the original Sherlock Holmes stories of Sir Arthur Conan Doyle and American history as told on the battlefields of the Civil War. Matthews is now researching the sequel, which follows Sherlock Holmes a bit further afield—to Florence, Mecca and Tibet.