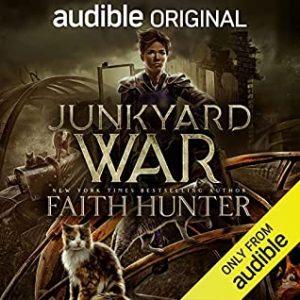 The story opens with Shining and her team infiltrating Clarisse Warhammer’s bunker with the help of the cats. They discover that Clarisse is making more thralls and preparing to take over more territory. They also conform that Mateo’s former second in command, Evelyn Raymond, is captive and alive. Shining realizes she must bring together all of the regional motorcycle clubs to have a chance at beating Warhammer.

As the third book in this strongly connected series, one should not start with Junkyard War. With the world and characters established, this story is more about action and resolution. The author gets into the nitty gritty of MC politics. Each of Shining’s thralls are independent but still working to make her successful. Each character is unique and offers something special to the group. There is a hidden depth in the storytelling that keeps me coming back. We also get glimpses of the bug aliens that attacked Earth, nearly destroying the planet and its citizens. I want to know why Shining didn’t think to question the alien AI before now.

Junkyard War is the battle readers have been waiting for. Shining understands how dangerous Warhammer is and how she could literally take over the world. The storyline builds until the climatic battle scene, which is fabulously detailed but a bit too drawn out for me. After the dusts settles, there is a satisfying conclusion and the book finishes in the way that could end the series or be the start of new adventures.

Narration: Junkyard War is shared via the first person POV of Shining. Ms. Hvam’s voice for the narrator/Shining is on the deeper side of average female and has a gravely component at times. She alters the voice for dialogue, using distinct accents and dialects for each character. I especially enjoyed the southern accent of Jolene, and the metallic/robotic accent of Mateo. She also does an amazing job voicing a young child, sounding authentic. I like how she portrays Shining. She’s got an edge and you can hear it in her voice… it’s not soft and comforting. It’s got grit. You can also hear exasperation with the situation in her non-spoken verbal cues. She brings Shining and the world to life.

In the end, the Junkyard Cats series is fresh, exciting, and well-done. While the initial story concludes with Junkyard War, there are many possible tales set within this alternate Earth, and I hope the author continues to share them with her readers.

Shining Smith and her crew have obtained the weapons they need to rescue one of their own from the grips of their mortal enemy, Clarisse Warhammer. But to mount an assault on her fortified bunker, they have to cobble together an army of fighters.

That could be the biggest battle of them all.

Shining will need to step back into the biker world she left behind to broker an uneasy peace, then lead rival factions into a certain death trap. Can Shining take Warhammer down without having to compel more and more people to do her bidding? And will her feline warriors, the junkyard cats, remain loyal and fight alongside her? Or will Shining have to become something and someone she hates, so that vengeance can finally be hers?