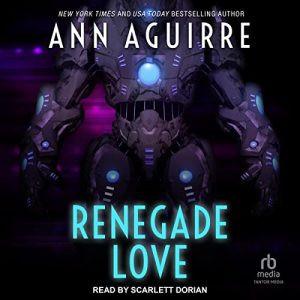 Renegade Love plays like a sweeping space opera heist with plenty of action and adventure, a bit of swashbuckling, and a sexy alien romance. I love Yara because she’s so positive and the best of humanity. Even though bad things happen, she tries to find the good and remains kind despite the lumps and bumps. With a touch of humor, mostly due to the inability of translator implants to capture the intricacies of human slang, Yara baffles Krag with friendliness and genuine interest. I absolutely loved how bewildered Krag is by Yara’s behavior. He can’t decide if she’s stupid or smart. She doesn’t fear him.  He thinks her kindness and interest is all an elaborate plan to escape.

As the pair spend time together, Krag lets down his guard, shedding his bounty hunter persona and for the first time since he was a child, reclaiming his birth name and discovering what it means to be free. The pair share stories, discovering both were abandoned as youth. They find common ground and their attraction boils up. They teach one another about themselves and their cultures. They explore their desires, and I appreciate that they have to learn how they can be compatible. Their relationship progresses steadily, and there aren’t any major internal conflicts, which I enjoyed. There is a focus on how they can solve their problems together.

They pick up some help for their heist, with one new crew member being of special interest. Working together, they form a found family. Even though this is the third book in the series, it can be read independently of the first two. There is only a very minor connection to the earlier books (which I missed until the very end of the book).

Narration: the series has a new narrator for the third book, but since it’s been a while since the previous title and there are new characters and a different setting, it didn’t bother me, although the narrator sounds very familiar to me. The story is shared via the alternating third person POVs of Krag and Yara. Yara’s POV is more bubbly and upbeat, like her dialogue, and Krag’s POV is a bit duller, calm, and neutral; both well-suited to the character. The author adds emotion into the narration as well as dialogue. She successfully alters her voice for different species, gender, and human dialect. She uses a fun, robotic voice for Wu-2, the droid/robot companion.

In the end, I enjoyed listening to Renegade Love, and hope the author pens more titles in the Galactic Love series.

My Ratings
Story: B
Narration: A-

He’s relentless. He’s aggressive. His armor is scarred to hell.

Toth Krag is infamous among bounty hunters. Nobody has ever seen his face and lived to tell the tale. He doesn’t fail. He doesn’t quit. And he doesn’t take prisoners. But maybe he’s getting soft. For once, he showed mercy, and no good deed goes unpunished, so now he’s tracking the deadbeats who run Volant’s Fabulous Spectacle.

Yara Duncan is always at the wrong place at the wrong time. That’s how she wound up as the human attraction in a space circus. Frankly, it’s the best gig she’s ever had. Aliens pay to watch her eat and do puzzles, and she gets to see the galaxy free of charge. She’s enjoying the adventure, until the scariest hunter in the universe shows up. For some reason, he thinks she’s in charge, and he’s determined to drag her back to face his employers.

Yara doesn’t run from her problems, and Krag doesn’t know what to do with a human who seems more interested in what he looks like under his armor.

This time, the hunter becomes the hunted in the wildly unpredictable game of love . . .