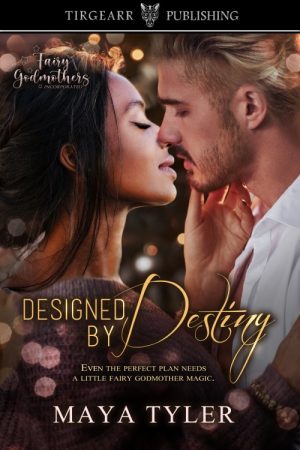 Bethany is an intern at Grey & Company. She’s been invited to attend a huge international convention in Vegas. At the meet and greet, a stranger walks up to her, asks her to play along, and then kisses her. The stranger takes her in to the hall and she realizes it’s Nicholas Grey, boss of the company.

Nicholas wants the Kingsbury renovation job so he can get out from his father’s shadow and secure his position at the head of the company. But Kingsbury tells Nicholas the shareholders have concerns about his personal life. Nicholas lies, telling him that his fiancée is in attendance – goes up to Bethany, whom he noticed earlier – and kisses her.

Designed by Destiny is a fake-relationship romance with a promising paranormal twist. Nick and Beth may come from different backgrounds, but both are good people with similar interests. Not only is he attracted to her, but he genuinely enjoys spending time with her. He finds her work original and exciting. Beth sees Nick for who he is and isn’t interested in his wealth or notoriety. I like them together – when they are open and honest and actually together.

The story falls apart in a few places. First, Nick struggles with a viperous female client. He doesn’t want to upset her (she comes from a prominent family), which unfortunately causes a LOT of grief for the pair. Beth does not deal at all with the things this woman says because Beth was hurt badly by her ex. Understandable, to an extent… However when it happens a second time, Beth all but gives up on her budding relationship, and rather than talking things through, just runs away. It’s very immature and frustrating. Then from this point forward, the story takes a dive into the overly dramatic, with each little action making things a bit more unnecessarily unbelievable.

The story does have an interesting paranormal twist with the incorporation of a fairy godmother. I like that Faye doesn’t overwhelm the situation and gently nudges rather than pushes. She’s discrete and kind. We get a few chapters from Faye’s POV, which includes a few flashbacks on how the Fairy Godmother Inc. came to be.

In the end, Designed by Destiny is an enjoyable romance, despite the drama in the last quarter of the book.

My Rating: C+ Liked It — But I had issues

After a painful break-up in university, Bethany Clarke has sworn off love to focus on her career. From her humble South Side beginnings to her position as an architect intern at a prestigious Chicago firm, she’s proven to be a hard worker and is proud of her accomplishments. In three years, she’ll be a fully licensed architect which is more important to her than anything else.

Confirmed bachelor Nicholas Grey is more than the playboy perpetrated by the tabloids. Now his position as CEO of the architecture firm Grey & Company is on the line, and his mother’s interference is making things more difficult. Nick’s committed to his work, but, in order to be taken seriously, he needs to land a huge project. A stable personal life will help guarantee the contract.

Fairy Godmother Faye Delmore hears Nick’s plea and steps in to help. Posing as a publicist, she suggests a strategy to polish his public image, which includes convincing Beth to play his wife. Faye knows Nick needs the huge project to save his job, but she also knows he needs Beth in his life.

What happens when you add a fairy godmother who loves playing matchmaker into the equation? A future designed by destiny.