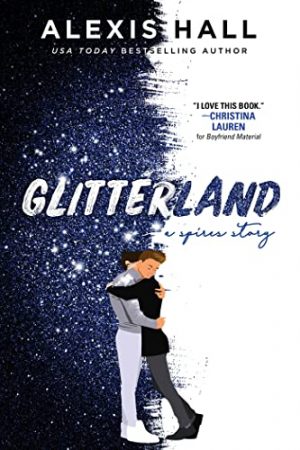 “And, God, I wanted, I wanted. These crumbs of bliss.”

Ash Winters has cultivated an impressive résumé so far in his twenty-eight years: beloved son, Oxford alum, successful author… Not to mention being both wealthy and attractive. It would be a golden life, if only he weren’t so inescapably exhausted from trying to live it. But, how can he possibly cling to the shadows he hides in when a man more garish and honest and blinding than the sun has the audacity to want him as he really is?

Even though this review is a repeat for me, it’s been about ten years, so I wasn’t surprised by the differences in perspective that I experienced while reading Glitterland. For one, it’s more obvious that Ash’s snarky, dismissive (and sometimes cruel) responses to—well, everybody—aren’t so much lashing out as they are self-defense. After all, mustn’t up always be followed by down? Good by bad? Doesn’t having lead to loss? That’s how it seems to be to Ash, at least. If he denies himself the former, maybe he can avoid the latter. Balancing the leger of his illness (Type 1 bipolar depression with clinical anxiety disorder) is an omnipresent tightrope he’s resigned himself to walk in order to merely continue to be.

Which brings me to Darian Taylor of Essex. Another thing that was sharper was how stunning Darian really is. He doesn’t just exist. He lives. Darian is a shimmery creature of light and noise and touch, absent of artifice and machinations, and he overwhelms Ash so entirely that color bleeds into his world for the first time in years. He’s a disaster waiting to happen: a sweet, “sin-u-ous” glitter bomb to decimate the sensible tweed of Ash’s camouflage. And he’s perfect.

I was also able to more fully appreciate the care Mr. Hall has taken with Ash’s illness throughout Glitterland. Through a combination of prescribed medication and an avoidance of recreational vices, Ash exists in the emotional equivalent of professional soundproofing. Not for Ash’s sensibilities, of course, but so as not to “disturb the neighbors” should things go wrong. It’s a transactional sort of caring, seen mostly in Ash’s “best friend” Niall, which doesn’t stand a chance against the genuine affection offered freely by Darian.

Glitterland is the first novel I ever read by Alexis Hall, and revisiting it has been a genuine pleasure. I’ve always liked this story very much, and even more so now. From the way Darian’s vocabulary and speech sneak their way into “posho” Ash’s other conversations to Ash’s incredulity at his own wanting and determination to go after it, Glitterland is wonderful. Even the sex is purposeful and delicious enough to garner an overt mention. I’m also extremely happy that Mr. Hall was able to republish it on his own terms, and I wish him well with everything going forward.

Once the golden boy of the English literary scene, now a clinically depressed writer of pulp crime fiction, Ash Winters has given up on hope, happiness, and―most of all―himself. He lives his life between the cycles of his illness, haunted by the ghosts of other people’s expectations.

Then a chance encounter throws him into the path of Essex-born Darian Taylor. Flashy and loud, radiant and full of life, Darian couldn’t be more different…and yet he makes Ash laugh, reminding him of what it’s like to step beyond the boundaries of his anxiety. But Ash has been living in his own shadow for so long that he can no longer see a way out. Can a man who doesn’t trust himself ever trust in happiness? And how can someone who doesn’t believe in happiness ever fight for his own?

Alexis Hall’s iconic Glitterland has been revised and expanded, with extensive bonus content and a stunning new cover by Elizabeth Turner Stokes.