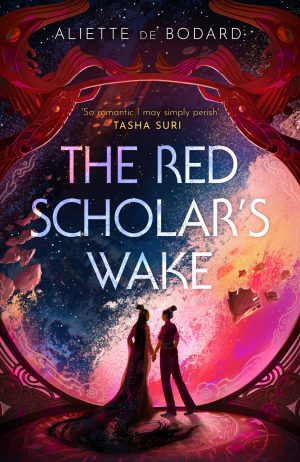 While I’ve always enjoyed science fiction as an element in many of the stories I’ve read, I don’t have a large collection of titles within the genre as a whole. However, the chatter surrounding The Red Scholar’s Wake (“Sapphic Space Pirates!!!!”) caught my attention right away. And although the additional blurbs and buzz significantly increased my desire to read it, neither gave the narrative its proper due.

Though The Red Scholar’s Wake is a standalone novel, it is part of a larger universe that I regret not reading in advance. The worldbuilding is very complex in some ways, but it wasn’t difficult to accept what the author created and move on to the storytelling. There’s an evil empire (which really is mostly evil), and “murderous pirates” (a good number of whom mean well?), and a lot of soul searching that needs to be done all around. There are mindships (sentient spaceships), “bots” of many shapes and abilities, and a near-matriarchal power structure that I found fascinating. The story was undeniably interesting, but the added familiarity before I began reading would have been nice.

The romance in The Red Scholar’s Wake is equally as important as the political intrigue, and I don’t believe either could exist within the narrative without the other. As a mindship who prefers interacting with the world via a human avatar, Rice Fish’s only experience with relationships is the one she had with her recently murdered wife—practical, non-physical, passionless. And, save her maternal affection for her daughter, Xích Si’s companions have been other scavengers, their sole purpose to survive. To say the odds are stacked against them as a couple is laughable. Any relationship that begins with “You’ll do,” isn’t going to have the best chance of enduring, but they manage to fight their way to a new beginning by the end of the story.

As much as I enjoyed The Red Scholar’s Wake, there were parts of the story that I simply couldn’t connect with—all of which might have been perfectly fine for another reader. The volume of political maneuverings of the various factions overwhelmed a good deal of the narrative for me, segmenting the romantic half of the story in a way that made it feel rushed by the end. I also had some difficulty with the rapidity of Xích Si’s seizing of both affiliation and command during the final chapters of The Red Scholar’s Wake, her self-assurance outside of her protectiveness of her daughter feeling like something I had to accept, but couldn’t fully grasp.

Though I had some issues with parts of the story, there is no denying that The Red Scholar’s Wake is a fantastical, action-drenched work of fiction that should appeal to a wide-ranging audience. The author’s command of imagery, ceremony, and emotion throughout the narrative is evident, keeping all the threads from flying apart, and bringing her main characters—battle-worn and somewhat unsteady—to the cusp of a very promising forever.

When tech scavenger Xích Si is captured and imprisoned by the infamous pirates of the Red Banner, she expects to be tortured or killed. Instead, their leader, Rice Fish, makes Xích Si an utterly incredible proposition: an offer of marriage.

Both have their reasons for this arrangement: Xích Si needs protection; Rice Fish, a sentient spaceship, needs a technical expert to investigate the death of her first wife, the Red Scholar. That’s all there is to it.

But as the interstellar war against piracy rages on and their own investigation reaches a dire conclusion, the two of them discover that their arrangement has evolved into something much less business-focused and more personal…and tender. And maybe the best thing that’s ever happened to either of them—but only if they can find a way to survive together.