Under the Final Moon 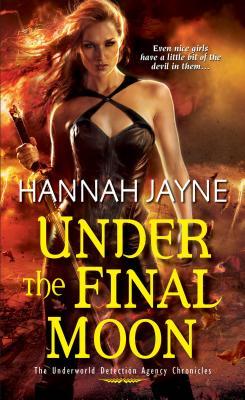 Gikany and Una are not sure, but we have heard that Under the Final Moon may be the last novel in the Underworld Detection Agency series.  Although it has the same humor and witty repartee we have come to enjoy, if this is the last book, we are a little disappointed.  Except for the ending, we did enjoy following Sophie through this most dramatic case of her life: confronting her father who is evil incarnate.

This is the book where Sophie finally confronts her father, the devil.  The love triangle between her, Alex and Will finally is decided.  Sophie’s troubles due to her being the Vessel of Souls is finally resolved.  This is the book that resolves these overarching plot lines.  Under the Final Moon has a slow burn as we slowly figure out where her father is and the final confrontation is slow to come.  But with him being the great Trickster this makes sense.  He would have all this drama.  But with all this slow build up we expected more from the ending, something we did not get.

However, the slow build up to the confrontation with the Devil is intermingled with Sophie trying to be tough and calm while taking it in stride without her usual hysterics.  Honestly, we were not sold on the “new and improved” Sophie.  However, we were not left without the humor and witty banter between Sophie and her best friend Nina.  We loved the light hearted moments.  We also enjoyed the camaraderie with her and Vlad.

Our true issue with Under the Final Moon is the abrupt ending.  It felt as if the novel was getting too long and it needed an ending and a quick one.  Both of us were slightly confused by the ending.  We had to reread the final confrontations and we still don’t have it figured out.  Without giving anything away, it just felt like some of what transpired may have been Sophie having a dream or hallucination.  We aren’t sure what was real or what may have been the Trickster playing Sophie.  It was just very confusing.

Included in the abrupt ending was the resolution of the on-going love triangle.  Honestly, we were not satisfied with the ending, but we are glad the love triangle was resolved and Sophie has a single beau at the end.  The way it was decided did not sit well with us.  It felt cheap, very strange, and rather insincere.  The beau claims love, love that has been there for some time, but we just never felt it…if it was truly there.

Although Under the Final Moon has all the characteristic humor and light-hearted situations of the previous books, the resolution of the overarching plot was weak.  We hope this is not the end of the series, as we have enjoyed following Sophie on her crazy cases and even more bizarre personal life, especially the stunts that her crazy vampire best friend pulls.  If you have followed the series, this is still a must read, even if it is to discuss with the rest of us still scratching our heads pondering the end.

It’s not the end of the world–until it is. Sophie Lawson may be a mere human with no special abilities except a strong immunity to magic. But the havoc she’s wreaked on the supernaturals who come up against the Underworld Detection Agency have earned her plenty of enemies. Still, a girl can’t freak out every time a horribly barbecued corpse is found with her business card in its hand. Or see a sudden glut of earthquakes, wildfires and three-headed dogs as just another day in California. But Alex Grace, her favorite fallen angel, is concerned–or saying he is to see more of her. Getting Sophie to see all the signs of the Apocalypse is an interesting way to heat things up. Or maybe what’s making everyone hot under the collar is the fact that all Hell is about to break loose. . .

2 responses to “Review: Under the Final Moon by Hannah Jayne”