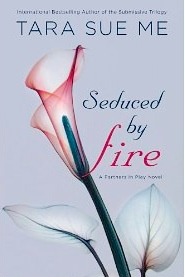 I have a lot I want to say about Seduced by Fire. There’s many quotes I found that resonated within me. Every day, we learn a little more about ourselves, and our interactions with others. I think this story is a great part of anyone’s journey of self-discovery, and while it’s about smokin’ hot guys and seriously hot sex, the tenants are valuable in not only the bedroom, but other areas of life. In reality, this title could almost be a manual for beginning submission. Even if reading BDSM/erotica isn’t your thing, indulge me in this review. Tara Sue Me, in my first experience reading her work, has given words to all the tip-toed-around ideas in several other books I’ve read recently. It’s all so clear now!

It’s frowned upon to not be a strong, independent woman in today’s society. It’s…taboo. However, in this era where we have single moms, women that work full-time (plus) and still manage a household, kids’ activities, and all the other things that women typically do, it’s no wonder that submission is a topic that is coming up over and over in today’s contemporary women’s lit. There has to be a place in our lives that isn’t driven by our thoughts, emotions, and desires. Asking a partner to take over certain aspects of daily living doesn’t necessarily work, but I think that it’s much more culturally accepted for one partner (generally the man) to be dominant in the bedroom. While this relationship is certainly a give-and-take thing, there’s almost always someone ‘in charge’ when there’s hot and heavy, emotional sex going on. Sometimes this role can shift from partner-to-partner. But that’s not what D/s relationships are all about. And the draw of being a submissive, in my opinion, is to simply not have to think about anything. To be able to simply do and enjoy. Still, we believe that ‘equal partners’ is the only way a relationship can work.

Julie, the female MC in Seduced by Fire, is that independent woman that controls every aspect of her life. She owns her own business, and her success is due to her high work ethic. She owns the shop with her friend, Sasha, who happens to be a submissive. Structure appears to be Julie’s middle name. I really like the way she decides – without pressure – to explore her curiosity of the submissive lifestyle. Without giving away too much, Julie’s first encounter with Daniel was pretty much ‘vanilla’. Nothing anyone would consider controversial. I mean, if Nicholas Sparks wrote a ‘good’ sex scene, this could probably go in one of his books.

The fact that Daniel, studly and Dominant MC, had decided he was interested in her, whether she shared the lifestyle with him or not, tugged at my heart-strings a bit. I knew that ultimately he would need to tell her. To let her know how he rolled. See if it scared the crap out of her or not, and if she was willing to explore what he saw simmering under the surface. He got lucky and she was open-minded – willing to try.

It’s completely frowned upon to feel out-of-control. Society paints a picture that (especially) women should control their destiny! There’s nothing wrong with not being in the driver’s seat, if that’s what makes you happy. Daniel – Mr.SexyDom – does a great job in Seduced by Fire of giving Julie all the facts about Domination and submission. He doesn’t push her, and he is straight-up honest about how D/s works for him:

“Never doubt the strength to be found in yielding. A good Dominant understands that strength. Protects it. Makes it flourish.”

I don’t think I’ve ever read a D/s title that has another, more experienced sub talking frankly for extended periods or mentoring another sub. I think that this is the part of the book that really spoke to me as a reader. Some days, I just want to not have to think about all the things involved in orchestrating life in a busy family. The little details get in the way of enjoying the moment. And I really appreciate the way the sentiment is communicated:

“…I enjoy the sex, of course, but for me, I think … I think it’s being under someone’s care.” … “When you’re with a Dom, you’re under his control, sure, but you’re also under his protection. For me, there’s something liberating in knowing you can drop all your worries, cares, and inhibitions and just feel for a while. Trust someone else to take care of everything. To take care of you.”

The surrender of power is difficult, but in reality, we all do this daily. Especially if we work for someone else. We don’t get to make the decisions; we simply have to do what we’re told. We’re being given so many messages about things, including body image and emotional stability ‘norms’ that every minute of our lives is structured and driven by rules, laws, dictates, and mandates. Seems like people would want to gain back control. When I read this passage that Daniel said to Julie, it hit home:

“A submissive is not weak because a Dominant controls her. A submissive is strong because she surrenders her power to him willingly.” He rested his hand on the top of her head. “It is not a power a Dominant should take lightly. Rather he should guard it as he would his life and when he returns it, she should feel her power increased because of his care.”

And this is when I turned into a puddle of girl-goo at Daniel’s feet.

I think my favorite thing about Seduced by Fire was the fact that the major conflict wasn’t actually between Daniel and Julie, although it affected them. Which is why this book is my first A+ rating for 2014. Creative use of conflict. The character development was excellent. I’d totally hang out with Sasha, Julie, and Dena for a Girls Night Out.

Long story short, I’m adding Tara Sue Me to the auto buy list, and I’ll probably work on picking up her first trilogy over the course of the next year. And seriously. If you’re looking for an honest book about building trusting relationships while finding yourself, pick up Seduced by Fire.

Despite being familiar with the different games people play in the bedroom, she’s never given into her curiosity about putting her body in someone else’s power—until a chance meeting with Daniel Covington, the seductive Senior VP of Weston Bank, draws her into a titillating new world of sexual experience, one that she never knew she desperately needed.

Daniel is highly respected within his community, but he hasn’t had an exclusive relationship for over two years. Yet Julie’s eager innocence is driving him to the brink of ecstasy, making him rethink his feelings about commitment.

As their sizzling connection heats up, Daniel is ready to take Julie fully under his command. But when the dangerous side of their play rears its ugly head, Julie will have to decide if she trusts him enough to surrender completely—or if she should escape before she gets burned…

2 responses to “Review: Seduced by Fire by Tara Sue Me”