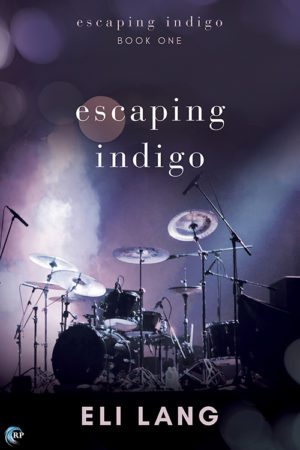 Escaping Indigo is a fairly brief, emotional study of the pitfalls of love, loss, anxiety, and misunderstanding. Micah is living a fan’s dream when he’s hired as a roadie for a band he’s loved for quite some time. But, being with them all long-term on a tour bus alters things, and his perspective of the individual members—Bellamy, in particular—begins to change. Unfortunately, both Micah and Bellamy have too many wounds that are still raw and aching to find an easy path to one another, and trying to hold onto something so fragile could cost them everything.

As much as I loved the premise of Escaping Indigo, there were a few things that I had a little trouble with. Micah’s constant worry over Bellamy leads to several moments of repetitive inquiry that made Bellamy seem more fragile than he was in other scenarios within the narrative. I also had some difficulties with Micah’s somewhat contradictory stance on Bellamy’s anxiety. While he claims to acknowledge and accept Bellamy’s determination to deal with his issues on his own, he frequently pushes the idea of therapy (including medicinal treatments, to which Bellamy is adamantly opposed). There were other small issues, as well, but they didn’t stop me from wanting the best for these two characters.

Romantically, I generally enjoyed the slow build between Micah and Bellamy. There were moments throughout the beginning and into the central part of the narrative where I wasn’t sure about Micha’s stance on the situation as a whole, but things did fall into place later on. Micha’s awareness of Bellamy outside of their roles as lead singer and roadie was very sweet at times, however, and when they truly connected with each other, the story came alive.

Aside from these issues, Escaping Indigo makes several important points about relationships. For starters, people aren’t always what they appear to be. Getting to know someone’s truths can be precarious business, and trying to manipulate the outcome is seldom advisable. Another thing that I appreciated was that it’s made abundantly clear that one person cannot “fix” another. There are myriad problems just waiting for anyone who tries, and Micah treads that line a little too closely more than once.

In the end, I’m somewhat conflicted when it comes to Escaping Indigo. On the one hand, there were several things that could have been addressed that would have made the narrative stronger overall. On the other, I think this story has a great deal of potential. I really liked everyone in the band, Bellamy especially, and Micah had his good moments, as well. Since the next story in the series will revisit the other members of the band, I’m very interested to see what the author might do from here. I can’t help but hope for the best for these characters and the series as, a whole.

Micah thought he’d always be in a band. All he ever wanted was to play drums and make great music, but when his best friend and bandmate passes away, Micah is left adrift. The thing that’s always lifted him up is now a reminder of everything he’s lost.

In an attempt to put his life back together, Micah takes a job as roadie for his favorite band, Escaping Indigo. He’s always admired the lead singer, Bellamy. On stage, Bellamy is confident, glittery, and radiant. But as the two grow closer, Micah realizes that in person, Bellamy is quiet, introspective, and a little uncertain. And that’s the person Micah is falling for.

Micah is determined to know all of Bellamy, both the rock star side and the side hidden from the audience, the side that creates music that touches Micah’s heart. Bellamy has secrets of his own, though, things he doesn’t want to share with anyone. And trying to uncover Bellamy’s truths might be the thing that ends up pushing him away.