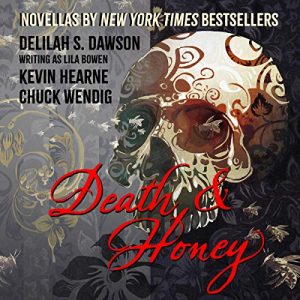 Death & Honey is an anthology of three unrelated novellas from some of the best urban fantasy/fantasy authors of our time… Each book has a loose connection to bees, honey, and death…

Picking up several months after the dramatic conclusion of the Iron Druid Chronicles, Oberon and Starbuck find themselves in the middle of another Meaty Mystery… they discover a dead body in the wilderness of Tasmania. Together with Atticus, now Connor Malloy, the dogs follow the trail of a killer.

I enjoyed catching up with Oberon and the gang, although I’m still a bit emotional over the last book and how the series ended. I think this shadowed my enjoyment a bit, but I still found the dogs awesome and hilarious as ever. The mystery was pretty straight forward; not as complex as previous two Meaty Mystery tales. I enjoyed how much Oberon loves Atticus and wants him to be happy, but I did miss the usual setting and characters.

Narration: It feels like home with Luke Daniels reading me Oberon’s thoughts. Atticus has gone back to his Irish accent. Luke Daniels covers a wide range of accents, ages, and genders, each character unique and fitting.

My Ratings: story: B, narration: A-

Rhett Walker left monster hunting four years ago after promising his love Sam, he’d settle down. Rhett was once known as The Shadow, but now he lives a simple life in a small community of non-quiet-humans. Rhett wasn’t looking for another adventure, but when a bee came calling, he knew he couldn’t ignore his destiny.

When I first started listening to Grist of Bees, I felt like there was a lot of backstory the listener isn’t privy to, getting bits and pieces-enough to give an impression, but not clear enough to fully understand. It wasn’t until I did some research that I discovered it follows a four book series, The Shadow, that ended in 2018. With that said, the story did okay as a standalone, but I think it would be much more enjoyable to those who’ve read the original series.

I felt the overall story was decent, but I’m not usually a big fan of westerns, and Grist of Bees has a strong western vibe, even though it is fantasy/urban fantasy. It meanders and moves slowly as Rhett takes on his own destiny to fight one more monster. While I was entertained, I felt the story moved a bit too slowly, and without going through his journeys during the initial series, it’s not all that meaningful for me.

Narration: The story is shared in the third person POV of Rhett. The female narrator has a deep voice with a slow, western drawl twang. It’s suiting for the story and setting. She modulates her voice somewhat for the additional characters, but there isn’t a lot of distinction with the exception of one or two of the characters.

My Ratings: story: C, narration: B+

Wren is a young assassin who nearly died. Given a second chance she feels doesn’t deserve, Wren tries to live a purposeful life. When a strange woman offers her a job, Wren is conflicted but decides killing for this stranger may be just what she was looking for.

Interlude: Tanager is another tale from an already established series, but I wasn’t as lost in this story as I was in the previous novella. Other than some confusing flashbacks, the story progressed fairy straightforwardly. And after getting into the story, I saw how the flashbacks were useful as the author attempts to to give new listeners enough information to move forward with Wren’s tale.

At first (after the flashbacks), I was pretty invested in Wren’s story, and I was interested in the overall series. I liked the mysterious world that includes humans with various powers and the ambiguous and changing moral code of Wren (and the supporting characters). While Wren can see if a person has or will kill, she can’t determine if the killing is just or not. She struggles with her purpose of killing without knowing the how’s and why’s. But after a while, the story started to drag, and I wasn’t a big fan of the climatic scene. The story did end on a slight positive note, but overall, the story is pretty dark. Additionally, I was SHOCKED by Wren’s age, which isn’t revealed to nearly the end of the book. Perhaps I missed it earlier in the story, or it is something that was established in another book, but I felt her age didn’t match her actions.

Narration: Listening to Xe Sands read this story was fabulous. I loved her soft, gritty voice. She captures Wren’s desperation and loneliness wonderfully. The story is told via the third person POV of Wren, which confused me at times. Her tale is so intimate, I felt it would have been better served coming from the first person POV.

My Ratings: Story: C+ Narration: B+

OVERALL: I picked up this audiobook solely for Kevin Hearne and Luke Daniels. I would have been happy with just Oberon’s tale, but wanted to give the other books a try. While I am glad I gave both authors a listen, I don’t plan on picking up either series based on these samplings.

My Ratings:
Stories: B-
Narration: B+

In The Buzz Kill by Kevin Hearne, Oberon the Irish wolfhound and Starbuck the Boston Terrier sink their teeth into a new Meaty Mystery when they discover a body underneath a beehive in Tasmania. It’s been badly stung, but the bees aren’t at fault: This is homicide. The hounds recruit the help of their Druid, Atticus O’Sullivan, and the Tasmanian police to track down the killer in the interest of a reward—but this time, they want more than food and justice.

Grist of Bees, by Delilah S. Dawson writing as Lila Bowen, follows Rhett Walker, who has given up his destiny as the monster-hunting Shadow to settle down with his beloved Sam. But when the call to action grows too strong, Rhett saddles up to follow a peculiar bee into the unforgiving desert. The bee leads him to a weeping mother in a strangely prosperous valley, and Rhett has no choice but to hunt the creature that’s stolen her child—even if it destroys a land of milk and honey.

Interlude: Tanager by Chuck Wendig returns us to the world of Miriam Black. Lauren “Wren” Martin is a young psychic woman who can see the stained souls of killers; it is her gift, or as she sees it, her curse. And up until now, it has been her mission to kill those killers, to remove them from the pattern so that they may not murder again. But now, after a death that may not have been deserved, she’s left rudderless, without plan or purpose, until a woman with a strange power of her own takes her in and gives her a new mission—and a new target.