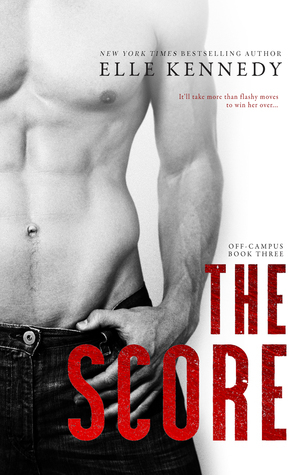 Author Elle Kennedy is quickly developing an avid fan base for her new adult Off-Campus series, and I may have to count myself among them—memes, gifs, and all.

For this reason, I had a tough time giving The Score, book three in the Off-Campus series, a rating because it’s not my favorite in the series, although I still liked it very much.

Dean Heywood Di-Laurentis is not as sympathetic of a character as hockey teammates Garret (The Deal) and Logan (The Mistake). He comes from old money, has not had much in the way of obstacles that he couldn’t charm or buy his way out of in life, and is therefore less relatable for the average reader.  He’s generally an optimistic person though, and I was inclined to like him.  He doesn’t come off as the spoiled brat many around him choose to accuse him of being.  Still, with that kind of charmed life, you knew going in that something big was coming to bring him down.

I think paid porn stars have less sex than Dean.  He oozes sex-appeal and is completely unapologetic about it.  Women basically throw themselves at his feet genitals.  His love interest is not Sabrina as was speculated, but Allie Hayes, roommate and BFF of Garret’s girlfriend, Hannah.  Allie is a nester, she has boyfriends, not boy toys.  After breaking up with her boyfriend of over three years, she decides to try and live life on the casual side. Dean is only too happy to oblige her, falling quickly into bed with Allie on the rebound.  These two characters have very physical personalities so their story has more sex and sex play in it than Kennedy’s previous two books in this series.  There’s too much story to say it crosses the line into erotica, but it does skirt with it.

In an unusual format for a romance novel, we see Allie and Dean hook-up (and hook-up and hook-up and hook-up,) fall in love, and just be happy together for at least the first two-thirds of the book before real and difficult challenge pushes up against their relationship.  It was a luxury to see them actually fall in love and find their own kind of intimacy, not just have it assumed because they have been physical.

Even though we know the fall is coming—we’re expecting it, it still hurts.  Dean, unfamiliar with true emotional pain, is brought low and doesn’t handle it well.  He becomes self-destructive and while it makes sense in the story, the use of hard drugs didn’t seem to fit with his personality and athletic background.  That was my only real objection to the plot. Allie is more understanding than most women might have been, but does maintain a mature perspective.

My favorite moment in the story is a Twilight reference that I won’t spoil for you—but it’s perfect. The banter alone, like The Deal and The Mistake, make it worth reading.  Kennedy does bring us around to a happily-for-now ending and then drops a bomb.  Clearly book four, unannounced at this time, will be Tucker’s book.  Tucker, the fourth roommate in the four friends’ off-campus housing, has been more background than character so far.  No more in book four. I will happily reread the first three books while I wait.

He knows how to score, on and off the ice. Allie Hayes is in crisis mode. With graduation looming, she still doesn’t have the first clue about what she’s going to do after college. To make matters worse, she’s nursing a broken heart thanks to the end of her longtime relationship. Wild rebound sex is definitely not the solution to her problems, but gorgeous hockey star Dean Di-Laurentis is impossible to resist. Just once, though, because even if her future is uncertain, it sure as heck won’t include the king of one-night stands.

It’ll take more than flashy moves to win her over

Dean always gets what he wants. Girls, grades, girls, recognition, girls…he’s a ladies man, all right, and he’s yet to meet a woman who’s immune to his charms. Until Allie. For one night, the feisty blonde rocked his entire world—and now she wants to be friends? Nope. It’s not over until he says it’s over. Dean is in full-on pursuit, but when life-rocking changes strike, he starts to wonder if maybe it’s time to stop focusing on scoring…and shoot for love.

2 responses to “Review: The Score by Elle Kennedy”