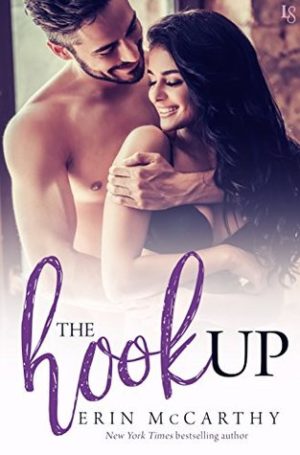 Erin McCarthy is not an entirely new author to me.  I have read and enjoyed—some more than others, several of her contributions to anthologies.  So I’m not sure why I haven’t read a full length novel from her before given that she’s a solid romance writer with multiple titles and series under her belt.  From what I have read, her writing has a certain intensity about it, but that intensity totally shines in The Hookup, the first installment in the Jordan Brothers Series.

In this book, McCarthy uses her intensity to accomplish the seemingly impossible in the romance genre—she writes a completely, brutally honest character who is uniquely likable and a seemingly worthless jerk who is, also, surprisingly likable.  Furthermore, there are no real bad guys as main characters.  The bad guys are peripheral, justifying certain emotions and choices, but almost without dialog.  The consequences of their choices interact with the main characters more than the people themselves. It doesn’t seem possible that an author could maintain tension under these circumstances, but McCarthy pulls it off.

Sophie Bigelow is a socially awkward academic.  She loves numbers.  She likes problems she can work and solve and get a definitive “right answer.” It’s not fair to compare her to Sheldon Cooper because she’s more real than that, not just a comedic stereotype or punchline.  People are not so easy to solve.  Sophie is not adverse to relationships, but she has no filter and that much honesty can be off-putting.  As a result, she’s made it to her mid-20’s as a virgin. Sophie makes a good point, “When you reach the age of damn near twenty-five and hadn’t relinquished your V-card, the assumption is you’re waiting for Mr. Right, which basically ruins potential relationships before they even have a shot.  Or men assume you’re a freak.  I wasn’t either.”

While at their family beach house in Maine for her sister Bella’s wedding, Sophie meets Cain Jordan. It felt a little obvious at the outset that the “bad one” in a set of gorgeous identical twin brothers was named “Cain.“ Even if everyone in the family has a name that starts with “C” how does “Cain” even get on the list?  His mother doesn’t come off as the brightest bulb in the bunch, but she is sincere.  Cain has just cause to be depressed about the circumstances of his life, at least he did at one time.  His reaction was to escape his justifiable pain with unjustifiable drinking.  He moved from there into active alcoholism.  Sophie sees no need to try and fix him, she just wants to lose her virginity.  Cain is happy to accommodate her.  Sounds like a cheesy set up, right?  This shouldn’t be a whole book.  In fact the deed is done pretty early on.  The Hook Up is a cheap title because book is, thankfully, more than the set-up, more than its title. I can hear Lorelai Gilmore screaming now, “A movie shouldn’t be its title!  …Snakes, snakes, snakes on a plane!“  Lorelai would be happy.  The Hook Up is more than its title. https://www.youtube.com/watch?v=yl5ATazM2cs

I wasn’t surprised that these two would go on to find love, but I was pleasantly amused at the way it unfolded.  One of my prime criticisms in the contemporary romance genre is the number of characters, especially women, who do not behave like normal, rational adults. They storm off in the middle of conversations or refuse to have them at all because it extends the plot.  To me that’s lazy writing.  A woman’s who’s that mad will stand there with her arms crossed and demand an explanation or ream you out for being an idiot.  McCarthy takes her brainy Harvard PhD student and lets her talk.  She says all the things the reader is thinking—and still has a plot.  Thank you!

McCarthy gives us a happy ending and an open question.  Where Sophie’s story wraps up, the status of her sister is left open.  I believe this is where the second story is going to pick up.  I’m looking forward to it because if McCarthy can take two what are so far non-adorable characters in Bella and Cain’s twin, and create a sympathetic story about them, I’m totally in.

My Rating: A  Loved it

Sophie: Numbers are my comfort zone, which explains why my sex life is a big fat zero. Then again, if I’m smart enough to earn a PhD, why can’t I calculate a way to get a guy into bed, just to see what all the fuss is about? With my prima donna sister, Bella, getting married in Maine, I figure her wedding is the perfect opportunity for my little experiment. And Cain Jordan seems hot enough—he’s certainly drunk enough—to show me what I’ve been missing. Judging by the body of evidence, it’s a lot. . . .

Cain: Being stuck in the same town as my lying SOB twin brother, Christian—who may or may not be the father of the son I’m not allowed to see—is a hell of a reason to drink myself silly after the lobster boat docks each day. Any port in a storm . . . But Sophie’s different. She doesn’t play around. And she’s becoming a habit I don’t want to break. Because the smartest woman I’ve ever met is also the sexiest—and the only one who makes me want to change.