The sorceress Oria has finally come into her own—able to wield the power of her birthright and secure in the marriage she once believed would bring her only misery. But the past she escaped still chases her, and the certainty of war promises to destroy everything she’s fought to have.

Once before Lonen led an army in a desperate attempt to stop the powerfully murderous sorcerers of Bára—and he nearly lost everything. Now he must return to the battlefield that took the lives of so many of his people. Only this time he has more to risk than ever.

With guile, determination—and unexpected allies—Oria and Lonen return to the place where it all began… and only hope that it won’t also be the end of them. 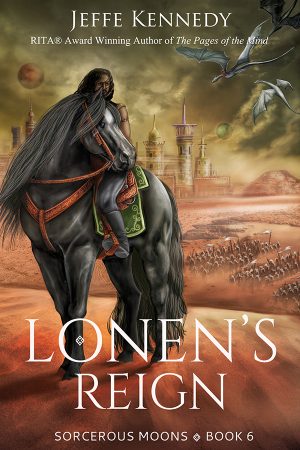 “Just a few more moments of your patience, Your Highness,” the healer Baeltya said, her tone abstracted as she concentrated.

Lonen stared up at the patterned, arched ceiling of Arill’s Temple, counting the interweaving strips of wood yet again. There were one thousand and fifty-two in the central spiral. He should be grateful for Arill’s magic—and Her dedicated priestesses who devoted themselves to healing—which made convalescence so much faster, if profoundly uncomfortable. Mostly, however, he chafed at the enforced inactivity. Much easier not to get injured in the first place.

At least his mother, who’d initially taken care of the gut wound he’d received from his brother Nolan during their duel, had left the follow-up care to Baeltya. The junior healer didn’t lecture him the way Vycayla, as both the dowager queen and his mother, seemed to feel entitled to do. Not only entitled, but compelled.

If he didn’t need her help to ensure he and Oria could officially marry with Arill’s blessing, according to Destrye law, he’d be tempted to tell his mother to go back to her hermitage already.

The wedding ceremony was a stupid formality, really. With the duel over and Lonen’s claim to the throne of Dru secured, he could declare Oria his wife and Queen of the Destrye once and for all. They’d fought hard enough for it. It still stuck in his craw that he’d had to fight his brother for it.

“Try not to twitch, Your Highess,” Baeltya said, sounding more emphatic and less vague. “This is a delicate piece.”

“I wouldn’t want you to meld my intestines to my bladder after all,” he commented wryly.

“You laugh, but given the previous state of your intestines, that’s not impossible,” she replied in a tart tone, her healing magic twisting in parts of his gut he wished he didn’t know about. “That final blow could’ve killed you—likely would’ve killed a man in less robust condition—so maybe spend this time contemplating your gratitude to Arill for Her healing gifts.”

“I’m grateful,” he grumbled. Though he’d much rather be with Oria and his mother as they sorted through Nolan’s psyche. He couldn’t decide if it made him feel better or worse that Nolan’s rebellion and treachery might have been fueled by a sorcerous taint from his time in Bára. And Arnon… Lonen didn’t know what to make of his younger brother’s changeable loyalty. First Arnon had backed Nolan’s challenge, then—apparently somehow swayed by their mother Vycayla’s return from self-imposed exile—he had refused to act as Nolan’s second.

So ironic that they accused Lonen of being enchanted and duped by his sorceress wife to the point they questioned his devotion to Dru, and now Oria was the only person he felt he could fully trust.

She laughed. “I don’t envy Oria in managing you if you’re always this difficult.”