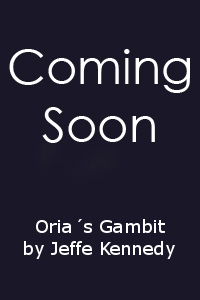 “What do you know about hwil?” She sounded, and felt, stiff.

“Juli told me some, last night when I brought you here.”

“Juli realizes that I’m going to need to know some of these things that you think to withhold from me. This is an important aspect of your life—and of any possibility that we’ll be able to touch each other—so I think it’s obviously valuable for me to be aware of its properties.”

“Understanding hwil won’t change anything, Lonen.” She realized she’d clenched her hands into fists by the bite of her nails into her palms. “I can’t just learn to bear someone else’s touch.”

“How do you know—have you ever tried?”

“What I’ve tried is to explain that I haven’t had much opportunity to practice any of this!”

“Don’t get all huffy with me.” He pushed a few pillows into a better position and leaned back against them, stretching lazily and then putting his hands behind his neck, displaying his furred chest to excellent effect. “Tell me what hwil feels like.”

“How am I supposed to do that?”

“First of all, relax. We’re just having a conversation.”

His smile stretched across his face as lazily as the rest. “A good place for it. How about this—do you have a hair brush?”

“Your braids are all messed up and it looks uncomfortable. Maybe you’ll feel better if I take them down for you.”

“You’re obsessed with my hair.” Though the snarled things were pulling uncomfortably.

He shrugged a little, gray eyes dancing with that mischief that sparked in blue stars from him. “I can’t deny it. Get your hair brush, Oria.”

She huffed out an impatient sigh, but got out of bed to retrieve the thing—though taking a moment to tie the neckline of her undergarment closed. The man was as relentless as Chuffta chewing a bone.

“You know you are. Speaking of, have you hunted recently?”

“Want some alone time with the new mate, huh? I can do that.” The derkesthai stretched his wings, yawned mightily, then took off out the open terrace doors.

“To hunt. Since we’ll be here for a while.” She stood uncertainly, holding the brush, arrested by Lonen’s intent expression and a wave of particularly intense desire from him. “What?”

“With the light behind you like that, your gown is nearly transparent. I can see all the lines of your body.”

She grabbed up her gown, wrapping it tight around her.

“Don’t do that, Oria,” Lonen coaxed. “You’re so beautiful. I love seeing you.”

A whisper of pleasure ran through her at that. Ah, vanity. “Well—I shouldn’t give you … ideas.”’

“I’ll tell you a secret.” His smile went crooked and he lowered his voice to a loud whisper. “I already have the ideas.”