The Tides of Bara 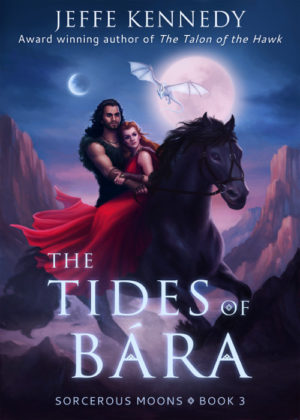 “We have to go back across the bay,” she said more loudly.

“I’m going to pretend you didn’t say that,” he told her easily.

“I think you’ll find that you can, because that’s where I’m taking you.”

“You’re taking me to Lousá. Or one of the other sister-cities. I’m not sure which is closest.”

“Uh huh.” Finished with the stallion’s grooming, Lonen checked his hooves for any remaining packed mud or rocks. Buttercup complied with unusual placidity. They were all exhausted. Or the cursed creature really did like his name. “And you know the way to these cities?” He asked Oria, keeping the tone light and conversational, knowing full well she didn’t.

“Well… no.” She frowned into the distance. “But there must be a way to find them. There are roads.”

“I don’t know, Destrye, but we’re going back across the bay.”

“I’ll tell you what, Princess.” He paused to beat the dirt from the saddle blanket and draped it over Buttercup’s back, then hefted the saddle up. Once he had it all cinched in place, he went to crouch in front of Oria. Her mud and salt encrusted braids snarled around her narrow, high-cheekboned face, reminding him of the stories of the snake-haired goddess. As in those illustrations, Oria’s eyes burned with a scathing otherworldly determination. If she weren’t also pale as death and wracked by a fine trembling, he’d fear for his extremities. Once she recovered her powers, he’d have to watch himself. Until then…

“I’ll tell you what,” he repeated, meeting her stare without flinching. “If you can walk across that bay under your own power, then sure, I’ll go with you and we can wander around the desert searching for those sister-cities.”

Her lush mouth thinned. “You know I can’t. That’s low, Destrye, even for you.”

“Nice to know there’s new depths for me to sink to,” he replied with false cheer. “I wouldn’t want to think I’ve topped out at my age. Guess that means we’re going to Dru. Chuffta, man, make yourself useful. Quit feeding the Arill-cursed fire already and kick some sand over it. We’re heading out.”

“It’s not like it could spread to anything,” Oria pointed out in a bitter tone as Chuffta set to the new task with enthusiasm, sweeping his wings to brush sand into the shallow pit.

“Habit,” Lonen admitted. “We’re wary of fire in Dru. Everything is built of wood there, not stone. A loose flame can cause great devastation in only moments. Up you go.”

He scooped her up, trying not to be alarmed at her frailty. If she’d reminded him of a furious kitten on previous occasions—all fur and spitting feistiness—now she felt like a broken-winged bird. She didn’t fight him, likely couldn’t, but refused to meet his gaze as he lifted her to Buttercup’s back. “Hold on to the saddle there until I climb up. If you can do that mind-trick again to hold him still that would be good. He’s calm today—tired, to tell the truth—but just in case.”

With her secrets uncovered and her power-mad brother bent on her execution, Princess Oria has no sanctuary left. Her bid to make herself and her new barbarian husband rulers of walled Bára has failed. She and Lonen have no choice but to flee through the leagues of brutal desert between her home and his—certain death for a sorceress, and only a bit slower than the blade.

A Race Against Time

At the mercy of a husband barely more than a stranger, Oria must war with her fears and her desires. Wild desert magic buffets her; her husband’s touch allures and burns. Lonen is pushed to the brink, sure he’s doomed his proud bride and all too aware of the restless, ruthless pursuit that follows…

A Danger Beyond Death…

Can Oria trust a savage warrior, now that her strength has vanished? Can Lonen choose her against the future of his people? Alone together in the wastes, Lonen and Oria must forge a bond based on more than lust and power, or neither will survive the test…