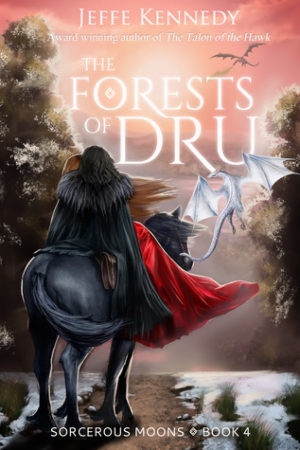 The Forests of Dru
Author: Jeffe Kennedy
Reviewer: Gikany and Una
Rating: B+

The Forests of Dru continues the story of Oria and Lonen, who are now finally in Dru and facing new issues.  Overall Gikany and Una liked the story, although it is starting to have a serial short story feeling.

Unlike the first book, which seemed like a complete novel, the subsequent books have felt more like novellas.  We could liken the format to a television series: the first episode is longer to set up the series and then the following episodes are shorter.  Each book ends in a cliffhanger.

Although this series feels like a series of short stories, the story continues to flow and build.  Oria and Lonen are still learning about each other and how to work together.  We love the trust and love that continues to strengthen and encourage the development of their relationship.  Especially as it seems the coin has flipped – Lonen’s right to rule is being questioned and Oria is deeply distrusted by the Destrye.  Oria is able to experience what the Destrye has suffered at the hands of her people and what they must do to survive.  Although we are only given snippets of the continuing plot, the tension mounts as Oria searches for a source of sgath so she can eliminate the threat of the Trom and end the war between the Barans and the Destrye.

Even though The Forests of Dru was short and the series is starting to feel like a series of novellas, we continue to like it.  The Sorcerous Moons is a captivating series.  We eagerly await the next installment.

Once Princess Oria spun wicked daydreams from the legends of sorceresses kidnapped by the barbarian Destrye. Now, though she’s come willingly, she finds herself in a mirror of the old tales: the king’s foreign trophy of war, starved of magic, surrounded by snowy forest and hostile strangers. But this place has secrets, too—and Oria must learn them quickly if she is to survive.

Instead of the refuge he sought, King Lonen finds his homeland desperate and angry, simmering with distrust of his wife. With open challenge to his rule, he knows he and Oria—the warrior wounded and weak, the sorceress wrung dry of power—must somehow make a display of might. And despite the desire that threatens to undo them both, he still cannot so much as brush her skin.

A Fight for the Future

With war looming and nowhere left to run, Lonen and Oria must use every intrigue and instinct they can devise: to plumb Dru’s mysteries, to protect their people—and to hold fast to each other. Because they know better than any what terrifying trial awaits…