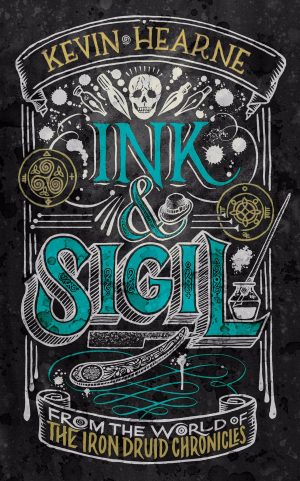 As a huge fan of Kevin Hearne’s writing, especially his Iron Druid Chronicles (IDC), I was very excited to get my hands on his new series which kicks off with Ink & Sigil. The story is set in his IDC world, with overlapping characters; however, it’s something wholly unique, and one need not have read IDC to utterly enjoy Al and his adventures.

At the start of the book, we are introduced to Al MacBharrais, a sigil agent; one of only five in the world. He is able to create magic using special ink, writing specific sigils on paper. This gift was granted by Brighid, First among the Fae. He helps keep dangerous fae and other creatures off the human realm and brokers contracts for the fae who want to come to the human realm. In the beginning of the story, we learn that Al’s apprentice, Gordie, is found dead. When Al investigates Gordie’s flat, he discovers that Gordie was involved in illegal fae trafficking and had many sigils and inks that are well behind what Al had taught him. Here Al meets the hobgoblin Buck Foi, who ultimately becomes his hilarious sidekick.

Mr. Hearne is a master storyteller. He creates amazing worlds and interesting characters, bringing it all to life through action and dialogue. Character attributes and world rules/dynamics are seamlessly woven into the tale, giving readers a complete picture without being spoon-fed details. Hearne also works in an impressive backstory using Al as the story teller. Through this, he gives readers an extensive understanding of the creation of sigils and a tutorial on the Tuatha Dé Danann. It is entertaining and helpful to both new and existing readers of the IDC series. Hearne provides a “history” lesson to readers without anyone really knowing it was happening.

At the heart of the story is a mystery – who is behind the trafficking. Al, Buck, and a few other close associates/friends, work together to bring down the operation. The plot is complex, but easy to follow as Al and his gang go from point A to point B. The motley crew works well together, each bringing a unique talent to the fight. Intertwined into the mystery are snippets of side plots that will span the series – to include a human police inspector who seems partially immune to the magic and a curse placed on Al that impacts his relationships with all those around him. While the action is intense at times, it is tempered by Hearne’s amazing humor. Some of it is outright silly slapstick, but other times it’s just a sly, offhand comment.

In the end I absolutely LOVED Ink & Sigil… it is so much fun. It’s familiar in that I know general mythology and world, but there is so much new – the characters, the sigils, inks, and agents…  And there is more humor than the IDC because Al is a fairly well-adjusted human rather than Atticus, an ancient Druid. Hearne’s storytelling is off the charts and there is enough left dangling out there to make me want to know more right away. It’s a wonderful start to a new series, and I hope it is followed with many books to come.

Al MacBharrais is both blessed and cursed. He is blessed with an extraordinary white moustache, an appreciation for craft cocktails – and a most unique magical talent. He can cast spells with magically enchanted ink and he uses his gifts to protect our world from rogue minions of various pantheons, especially the Fae.

But he is also cursed. Anyone who hears his voice will begin to feel an inexplicable hatred for Al, so he can only communicate through the written word or speech apps. And his apprentices keep dying in peculiar freak accidents. As his personal life crumbles around him, he devotes his life to his work, all the while trying to crack the secret of his curse.

But when his latest apprentice, Gordie, turns up dead in his Glasgow flat, Al discovers evidence that Gordie was living a secret life of crime. Now Al is forced to play detective – while avoiding actual detectives who are wondering why death seems to always follow Al. Investigating his apprentice’s death will take him through Scotland’s magical underworld, and he’ll need the help of a mischievous hobgoblin if he’s to survive.